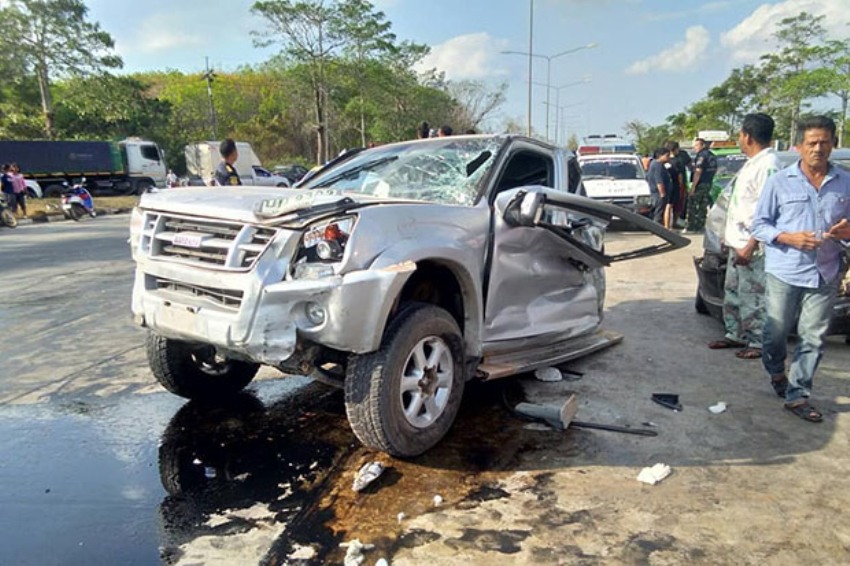 One person has been killed and six others injured in a pile-up involving an 18-wheel freight truck and eight other vehicles in Southern Thailand.

Pol Capt Luesak Anusilp, a duty officer at Kapang police station, said the accident took place while many vehicles were stopped at a red traffic light at an intersection in Nakhon Si Thammarat .

The 18-wheel freight truck rammed into a row of eight vehicles in front of it, damaging all of them. One of them, an Isuzu pick-up, was completely crushed. The driver, Chaiwut Ponrit, 61, was seriously injured. Tragically he later died at Rassada Hospital in Trang province.

According to the Bangkok Post, six other people – a boy, three women and two men – were also injured and admitted to hospital.

An investigation was underway to establish the cause of the accident. Officials from the department of transport are inspecting the break system of the freight truck. Police said charges and fines are pending.

Meanwhile, a man has been killed and people five injured after a big bike slammed into a passenger van making a U-turn on the Old Sukhumvit road in Bangkok. The accident occurred at about 8pm in Khlong Bang Saothao area in Bangkok.

The accident happened after a group of people board a passenger van. The group planned trip to visit the famous Khao Khitchakut temple in Chanthaburi province.

After all were on board, the van made a sudden U-turn on the Old Sukhumvit road just south of Bangkok. At the same time, a big bike, which was running from Khlong Dan, suddenly rammed into the middle of the passenger van.

The big bike driver, identified later as Anan Phosila, 26, was killed instantly. Five van passengers – three men and two women – were injured by the impact. They were rushed to Ratrin Hospital.

Police were investigating to establish the actual cause of the accident.