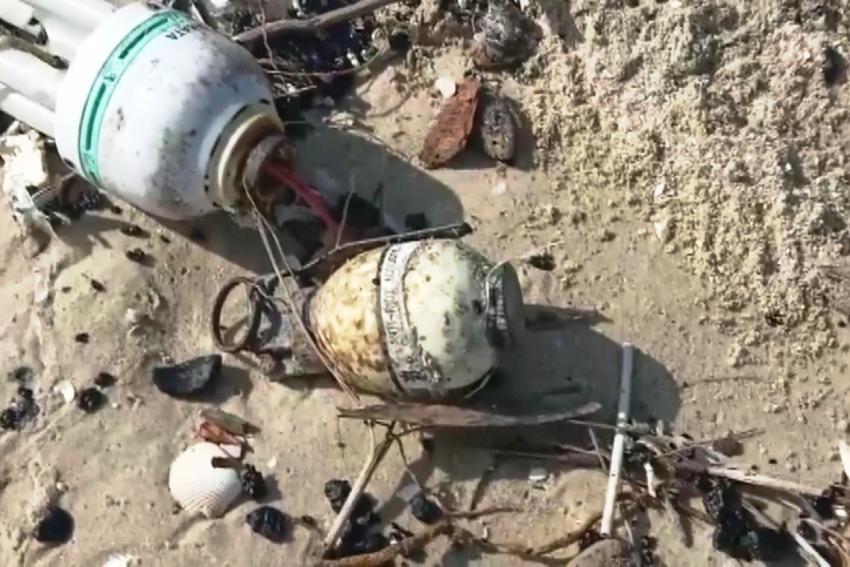 A local fisherman has found a live hand grenade on a beach in Nakhon Si Thammarat province in southern Thailand on Monday. Police said the hand grenade may have washed ashore with waste and tar balls from oil slicks.

The grenade, which was complete with a lever and safety pin, was spotted by local fishermen from Ban Na San village. The fisherman quickly reported it the kamnan of tambon Na Saton who called Hua Sai police.

Pol Col Chokdee Srimuang, the Hua Sai police chief, ordered a patrol to confirm the report. Upon finding the hand grenade they placed a car tire over it. It was later destroyed by explosive ordnance disposal police.

Mr Sukij said the 10-kilometre stretch of the beach in Hua Sai district has long been covered with tar balls. The tar balls come ashore from oil slicks offshore. Similar pollution from oil slicks has been spotted on many beaches in Ranot and Sathing Phra districts of Songkhla province.

Tar balls are created after freighter and fishing ships dump their bilges that contain oil. This oil then mixes with sea debris and forms tar balls. The tar balls then was ashore polluting Thailand’s beaches.

According to The Thaiger those dumping oil into the sea are in violation of two different laws:

1) The Act on Navigation in Thai Waters BE 2456 Section 119. Which also carries a penalty of up to three years imprisonment, a 60,000 baht fine or both. Violators are also required to make a payment toward the treatment or rehabilitation of the contaminated area.

2) The Enhancement and Conservation of National Environmental Quality Act BE 2535, Sections 96 and 97, which also states that violators must pay the cost of water treatment. Also pollution cleanup, and pay for any damages, whether to the livelihood or the health, of people affected.