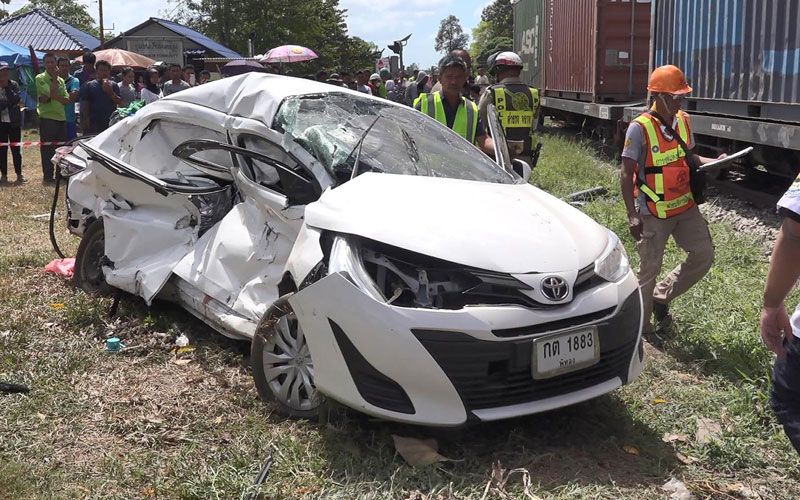 A father and his 22 month-old daughter have been killed and 3 other family members injured after their vehicle collided with a train in southern Thailand. The horrific crash happened at an non gated train crossing in Hay Yai district.

When police and rescue workers arrived at the scene the found the father dead behind the wheel. His 22 month-old baby daughter was found dead outside the car. Also inside the vehicle rescue workers found his wife, other daughter and his younger sister.

Hat Yai police said the family was travelling from their home in Phatthalung to visit relatives not far from the crash scene. Authorities speculate the driver might have not been familiar with the non gated train area.

The freight train, which was travelling from Padang Besar to Hat Yai, was approaching at the time.

Local residents say there have been frequent accidents involving trains and vehicles at the non gated crossing. In October last year, a train rammed into a pickup truck, injuring three people at the same train crossing.

The impact carried the truck about 300 meters from the crossing. The train engine was only slightly damaged and it later continued on to Hat Yai in southern Thailand.

The pickup driver, Chatchai Saengsupa, 18, was taking his father Chaiwat, 51, and mother Nuban, 48, to hospital.

Mr Chatchai said he did not see the train approaching but his father did and told him to hurry across. When he floored the accelerator the engine stalled. consequently leaving the truck stranded on the tracks. As a result the train hit the left side, where his father sat.

Photos from the car-train crash in Southern Thailand: