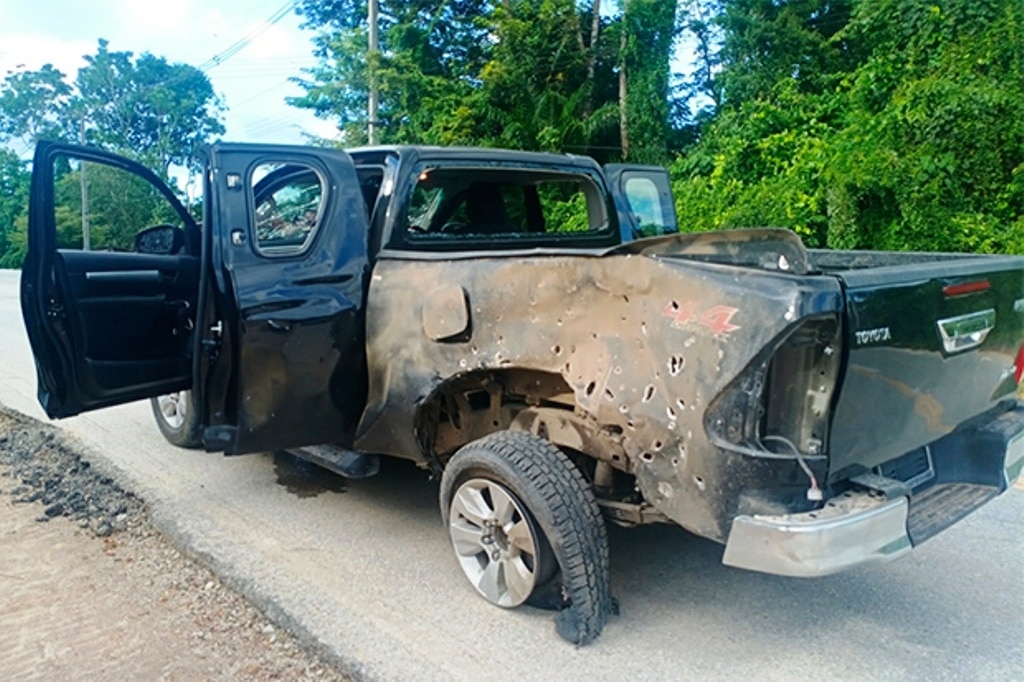 A pickup carrying army rangers to a wedding suffered major damage when a bomb exploded on a roadside in southern Thailand on Sunday. Remarkably no army rangers were injured.

Pol Lt Seksan Ruangrit, a duty officer, said the attack occurred a approximately 3.50pm. The pickup was carrying a civic action team from the Army Ranger Company 4608. The soldiers were on their way to a wedding at Bue Cho village in tambon Sawo in Narathiwat.

The improvised bomb was planted beside a road at Sawo Hile village in tambon Sawo. It caused major damage to the rear of the pickup, but inflicted no casualties, he said. An explosive ordnance disposal team was dispatched to the scene.

Last Wednesday a rubber grower was shot dead in Sri Sakhon district of Narathiwat, and a bomb explosion targeted army rangers providing protection for teachers but caused no injuries.

Sorpree Arma, 48, of tambon Sri Sakhon, was shot dead about 6am as he left his home in Aibuekae village to go to his rubber farm, the 49th Ranger Task Force reported.

About two hours later, a bomb went off on the side of a local road in tambon Chalerm of Rangae district as a ranger patrol was passing about 7.33am. Nobody was injured by the explosion, said Pol Col Chonlathit Khiew-on, duty officer at Rangae police station. Police were investigating.

Violence in Thailand‘s southern, mainly Malay Muslim provinces has been steadily escalating since early 2004, exacerbated by the disastrously heavy-handed policies of Prime Minister Thaksin Shinawatra. There is widespread concern in the region that left unchecked, the unrest could turn into a mass-based insurgency, or even a regional jihad, although to date there is no evidence of external involvement in the bombings and killings that have become almost a daily occurrence.

The Thai government managed to stem the unrest with political and economic reforms that undercut support for armed struggle, and hundreds of fighters accepted a broad amnesty. The insurgency looked to be all but over by the mid-1990s.