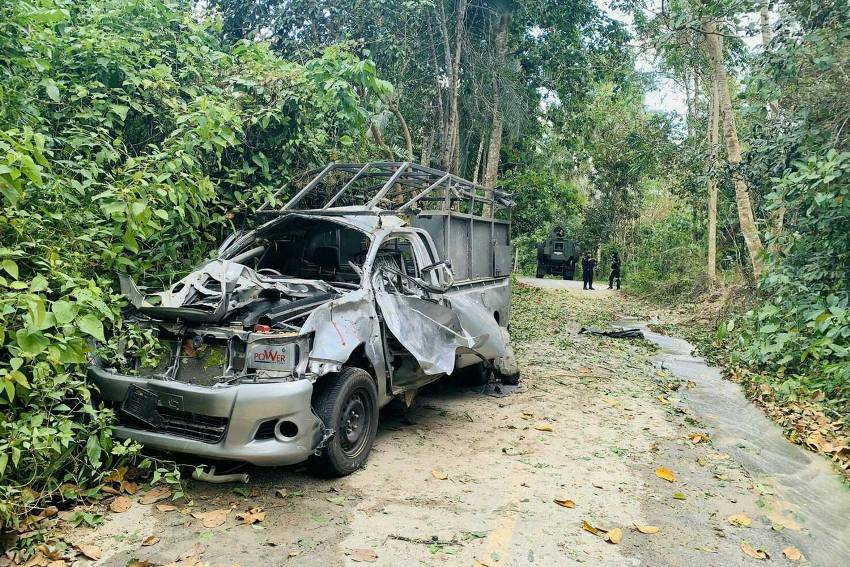 An army ranger has been killed and five others wounded in a roadside bomb blast while they were on patrol in Narathiwat Province of southern Thailand. The explosion occurred on a local road in a village at about 4pm on Friday.

A military truck carrying army rangers were patrolling along the route when the blast occurred.

The force of the blast wounded six rangers who were rushed to Bacho Hospital. Tthe head of the patrol team, was later pronounced dead, the Bangkok Post reported.


Pieces of the bomb were found scattered over the road and the military truck was badly damaged.

Investigators also found that it was a home-made bomb used for the attack. It was planted under a roadside tree and detonated when the patrol truck passed the spot.

Lt Gen Pornsak Poonsawat has ordered the immediate deployment of army rangers to the area. Roadside checkpoints have also been set up to block possible escape routes as authorities hunt down the militants.

Meanwhile, Eight people have been injured by shrapnel from a roadside bomb, including two school children. They were amongst a group gathered near a public park in Songkhla, in southern Thailand.

Also amongst the injured were the Sabayoi district assistant chief, a local defence volunteer and Sabayoi villagers.

Security authorities currently speculate that southern insurgents detonated the bomb as a converted pickup truck passed the spot. The blast blew the vehicle onto the side of the road.

There was also another clash reported between officials and suspected southern insurgents but there are no further details around that incident at this time.

Thai officials in January held their first meeting with the Barisan Revolusi Nasional Melayu Patani (BRN) insurgent group. BRN representatives for years had refused to take part in negotiations. Above all to resolve the 16-year-old southern conflict that has caused some 7,000 deaths.

The government’s chief negotiator recently expressed confidence at a meeting in Kuala Lumpur.  The meeting set the stage for further discussions to bring peace to the restive region.