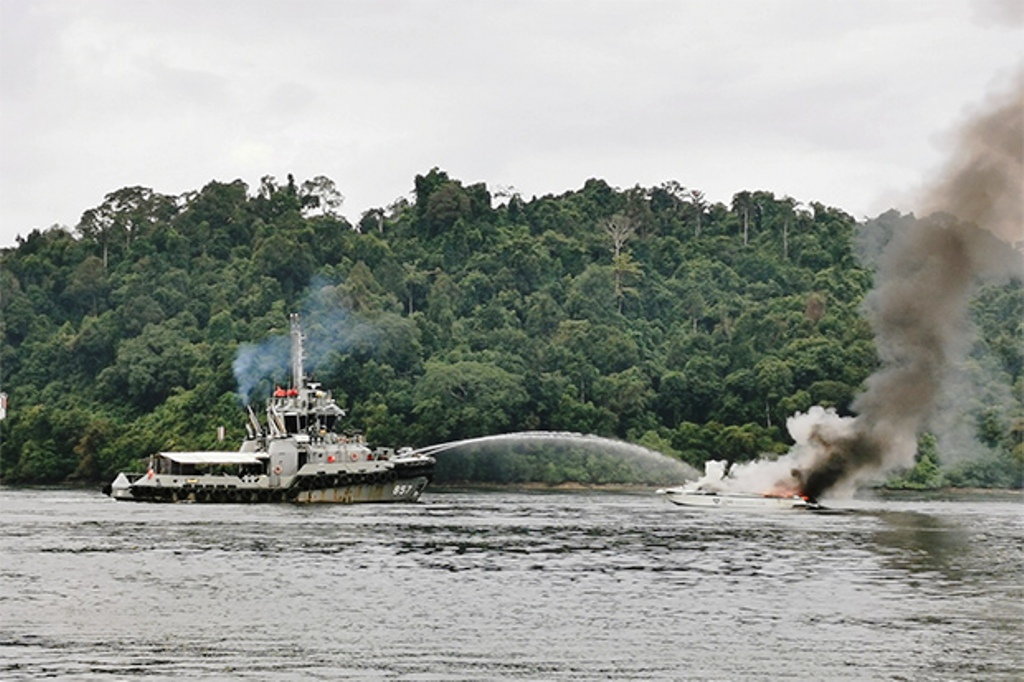 Five crewmen were injured, three seriously, after a speed boat went up in flames in southern Thailand’s Phang-Nga is a province on Sunday. Police said the speed boat fire occurred at about 8.30am. According to witnesses the speed boat was at the Thap Lamu boat pier in tambon Lam Kaen, Phang-Nga.

When the speed boat skipper started the engine sparks came from the engine, followed by an explosion. Five crewmen were injured, three of them seriously, including the skipper.

The seriously injured crewmen were admitted to Vachira Phuket Hospital and the other two with minor injuries were sent to the Khao Lak medical centre in Phangnga. Fortunately, there were no tourists on the boat.

The burning speed boat was towed away to the middle of a water channel to prevent the fire from spreading to other boats.

VAdm Choengchai Chomchoengpaet, commander of the 2nd Naval Area, dispatched HTMS Panyi, a navy boat, to the scene to help put out the fire and tow the damaged boat away. An investigation was underway.

Phang-Nga is a province in southern Thailand, bordering the Andaman Sea on the west coast of the Malay Peninsula.

One of the islets, Khao Phing Kan, is known for a 20m-tall rock called Ko Tapu, or James Bond Island, which is featured in the film “The Man with the Golden Gun.”

In February of this year, 2wo Russian children were killed and 21 other tourists injured when two speedboats collided near a marina in Phuket. Police said the collision happened at the channel near Phuket Boat Lagoon.

Injured tourists were rushed to local hospitals. Two of them, a 12-year-old boy and a six-year-old girl from Russia, succumbed to their wounds at hospital.

Police quoted eyewitnesses as saying that Panan boat cut in at a junction and caused the collision. The drivers of the two speedboats were charged with reckless driving causing deaths and injuries.