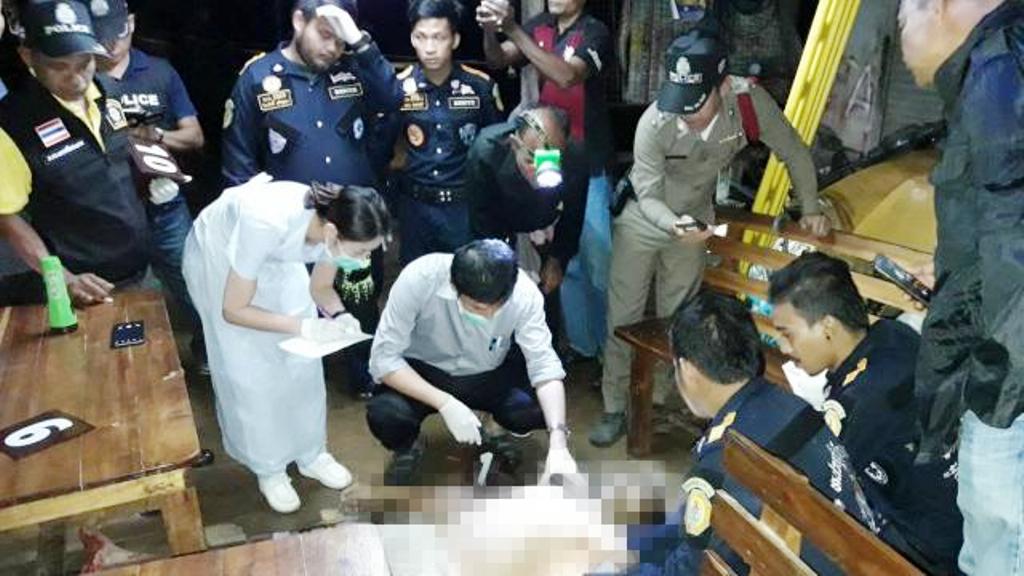 Gunfire erupted at a wedding reception in southern Thailand on Saturday night, killing four people and seriously injuring another. Police said the incident occurred at about 11pm during a wedding party held at house Nakhon Si Thammarat province.

A preliminary police investigation revealed that two of the dead were a married couple. They were identified as Aroon Phothavorn, 31, and Darawan Boonmeechai, 24.

Police said that when Aroon and his wife Darawan arrived early evening and Darawan bumped into her ex-lover. The man reportedly became jealous and later became embroiled in a heated argument with Aroon.

The bride, the bridegroom and other hosts tried to break up the quarrel and led the two men out of the house. THey decided to settle their differences on the road in front of the house. A gathering crowd of curious onlookers was sent fleeing in panic when shooting erupted.

After the gunfire went silent, both Aroon and his wife Darawan were found lying dead on the road. Both bodies were riddled with bullets, the Bangkok Post reports.

Narongrit and Kanchit were admitted to Tham Phannara Hospital where they were pronounced dead. Mr Sathaporn was admitted to Thung Song Hospital, seriously injured.

Southern Thailand police were trying to determining why the shooting occurred and who had fired the fatal shots.

A number of spent cartridges of 9mm, .38 and .22 ammunition were recovered from the scene.

Meanwhile, a 20-year-old man has been arrested in southern Thailand for bashing his girlfriend head in because she tried to breakup with him. On Sept 13, police were notified that a woman’s corpse had been found inside a cage outside a home in southern Thailand’s Phatthalung city.

Police said Natthapol initially denied any knowledge of the case, he eventually reportedly confessed after a long interrogation. He admitted to killing Kochakorn after she said she would leave him. He said he placed her dead body in a cage outside, Asia One