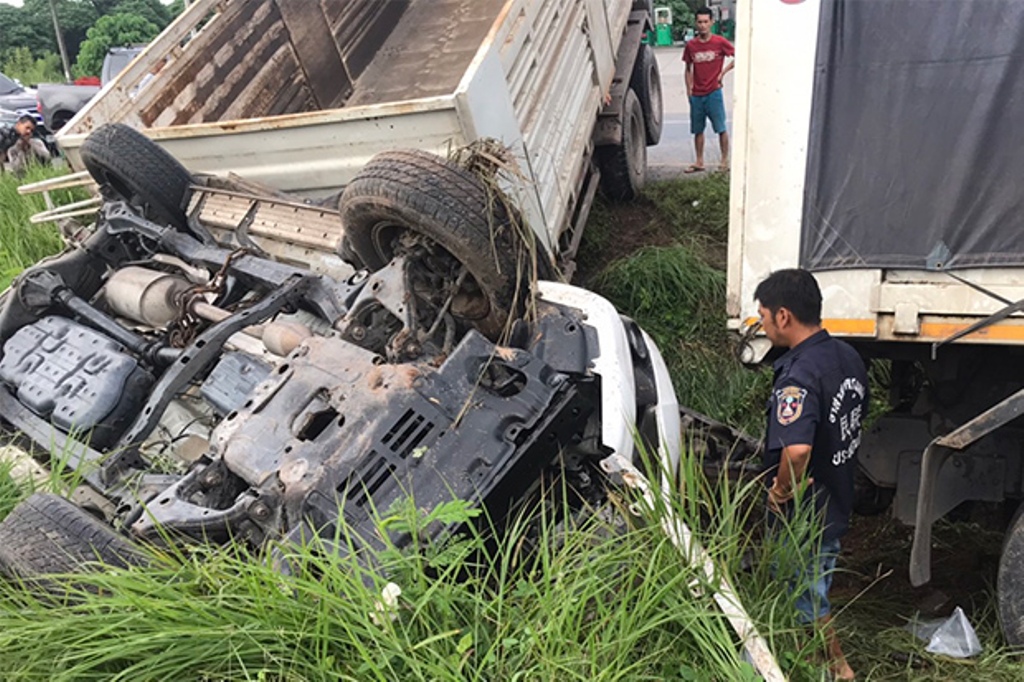 A man was killed and his wife, son and granddaughter injured when a lorry ran their Toyota SUV off the Highway in southern Thailand on Sunday. The accident took place at about 11am tambon Tham Phannara in Nakhon Si Thammarat.

A police investigation revealed that the family’s Toyota Fortuner was heading for Chumphon province when it was overtaken and then knocked off the highway by a 22-wheel freight truck.

The SUV overturned and came to rest on its roof in the ditch in the median of the highway.

Rescuers used hydraulic jacks to force open the Toyota Fortuner SUV. One man, identified as Phap Sripen, 67, was found killed in the vehicle. Three other people were injured — his wife Uean, 58, his son Kiatipong, 36, and his 10-year-old granddaughter.

Kasem Chaichan, 22, the lorry driver, fled the scene after the accident but surrendered at the Tham Phannara police station shortly afterwards. He allegedly admitted to falling asleep at the wheel after several trips delivering gravel.

Eighteen people were injured after a chartered bus with 56 passengers including children crashed into the ditch in the median of the Asian Highway in southern Thailand’s Hat Yai district on Saturday night.

The 56 passengers were from Nathawi district of Songkhla. They had chartered the bus to take them to Wat Bangpho temple in Krabi province for a traditional tod krathin ceremony.

According to passengers, at about 10.30pm, on the way back to Songkhla, the bus veered off the highway and crashed into the median ditch. The chartered bus ended up lying on one side.

When rescuers arrived at the scene 18 passengers were injured, most of them slightly. They were admitted to Hat Yai and Songkhla Nakarin hospitals. The driver was not hurt according to the Bangkok Post.

State Railway of Thailand governor Nirut Maneephan confirmed the death toll at the site of the crash to reporters.

Footage shared by a government department showed the bus edging from the road onto train tracks before a blue cargo train slammed into its side. Early images by rescue workers showed gnarled metal and debris, with bodies lying by the train tracks and people’s belongings scattered.