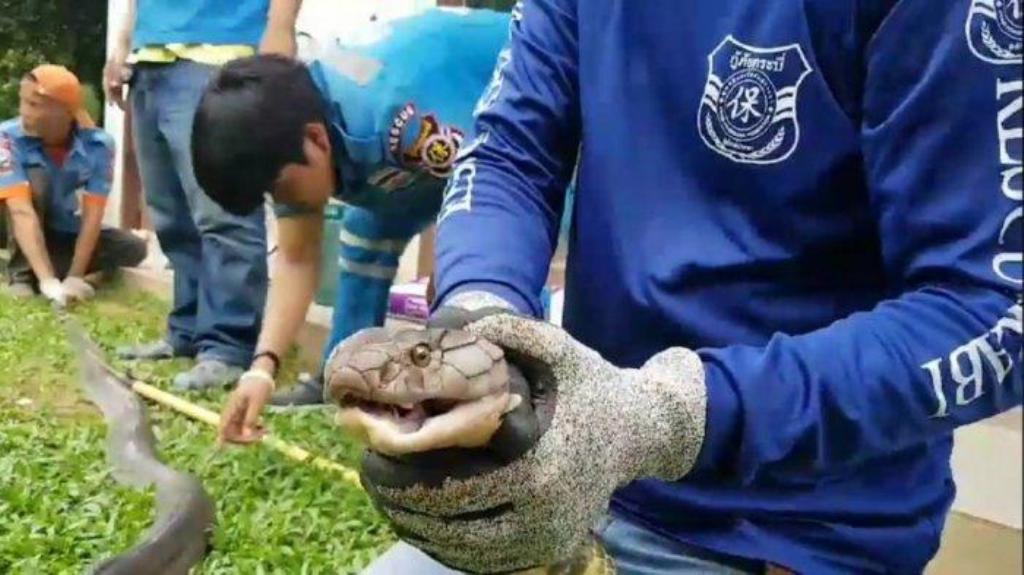 One of the snake hunting team members was, however, bitten by the cobra before it was captured by his colleagues. He was rushed to the nearest hospital for treatment.

The search for the poisonous snakes in Ban Kok Kor was in its second day today (Wednesday) as the reptile hunters from Nakhon Si Thammarat and Surat Thani provinces joined toxicology officials to comb the oil palm plantation in the village, to look for the highly venomous serpents which had been sighted crawling across the road in the village on an almost daily basis.

A backhoe was also used to clear the thick bushes, to deprive the snakes of their hiding places.

Mr. Chirasak Smathi, a health official in Ban Pho sub-district, said that the Ban Kok Kor villagers are relieved now that the snakes have been caught, but they believe that there are still many more hiding in the bushes in and around their village, after one of them killed a 50-year-old man in the village.

The King Cobra is the longest venomous snake in Thailand, reaching lengths of up to 7m (22 feet). The King Cobra isn’t actually a true Cobra at all, but part of a separate genus. The species that live in the forest tend to be darker in color than those living in grassland environments.

King cobras have a lifespan of about 20 years. King cobras are sexually dimorphic in size, with males reaching larger size than females. Despite their large sizes, typical king cobras are fast and agile.

King Cobras are ophiophagus, which literally means “snake­eaters”. Their diet primarily consists of other snakes, but they also feed on eggs, frogs, small mammals and reptiles. They are active both during the day and at night.