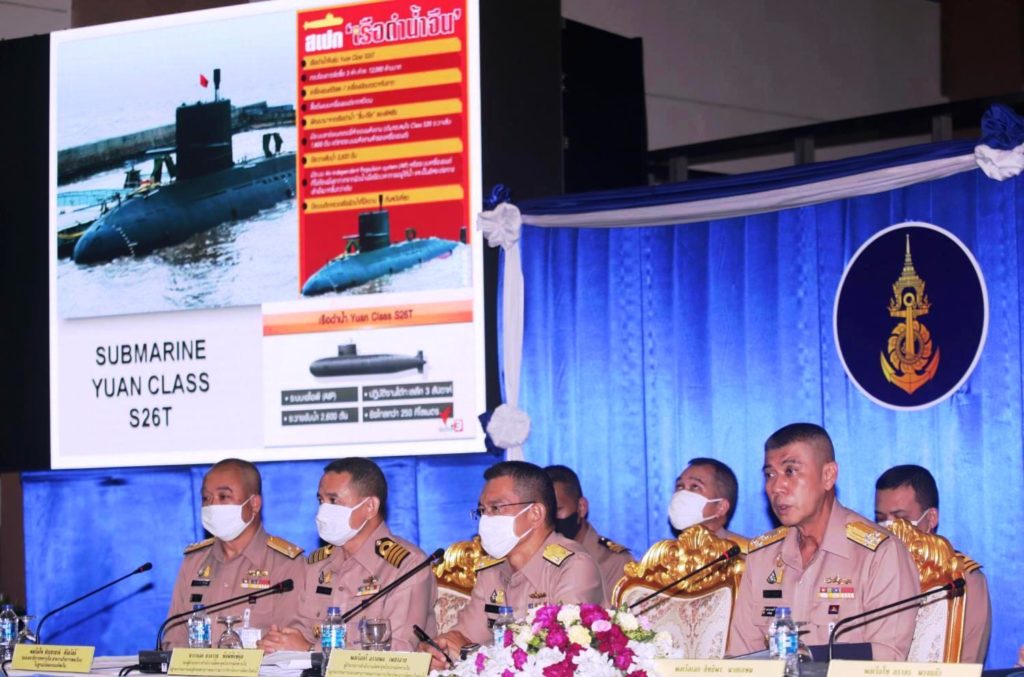 Thailand’s Royal Thai Navy has defended its planned procurement of two more submarines worth Bt22.5 billion from China. The Navy also accused the Pheu Thai Party of exploiting the issue for political gain.

The government and the Royal Thai Navy are under fire after a House subcommittee last Friday approved the purchase.

The public outcry over the submarine procurement forced the navy to hold a media conference on Monday. The topic #ประชาชนไม่เอาเรือดําน้ํา has been among the top hashtags on Twitter since the budget got the nod from the subcommittee.

During Monday’s press briefing at the navy headquarters in Bangkok, the Navy used the number of submarines in service or being bought by neighbouring countries to substantiate its need for a strong submarine fleet.

Submarine money to come from budget

The navy argued that the purchase was transparent and the money would come from the navy’s budget over seven fiscal years.

Navy chief-of-staff Adm Sittiporn Maskasem said at the briefing on Monday the navy needed more submarines as part of its defence strategy, but the issue had been dragged into politics.

“We have found there are political attempts to use this issue to attack the government,” he said.

The purchase of the first of the planned three submarines from China has already been finalized. Using money from the 2017 budget. Delivery is expected in 2023.

On Sunday, The Pheu Thai Party said that the contract is not a genuine government-to-government deal as claimed. Because navy chief Adm Luechai Ruddit who signed on behalf of Thailand had no authority to represent the government. Furthermore the Chinese company which signed the contract was also not representing the Chinese government.

Only the prime minister or the foreign minister can legally represent the government in such deals and only the defence minister is able to be assigned that authority if necessary, said Mr Yutthapong.

“We will not let politicians use false information to create hatred of the navy. Don’t politicize the issue. If you, politicians, run out of ideas to fight against the government, just look for others, but don’t use the submarine issue,” Vice Adm Prachachart said.

Last Friday, the subcommittee approved the navy’s procurement of the submarines, with a vote of 5-4. The Pheu Thai Party was in the minority that vote against the purchase plan.

Vice Adm Thalerngsak Sirisawat, chief of the Naval Operation Department, said that neighbouring countries in the Southeast Asian region have a total of 18 submarines in service.

Even though major wars are unlikely to break out anytime soon, disputes involving territorial and maritime claims in the South China Sea have been ongoing. Even more with major powers getting involved, he said.

The sea also serves as a main travel and goods transport route for Thailand. Furthermore if Thailand’s navy is not strong enough, its maritime interests will be affected. Especially by the South China Sea disputes, Vice Adm Thalerngsak said.

Vice Adm Thirakul Kanchana, chief of the Office of the Royal Thai Navy Naval Comptroller, said that the money to buy the two submarines would come from the navy’s budget over seven fiscal years from 2020-2026.

He added that the government has instructed the navy to give a budget of 4.13 billion baht back to the government. Above all to support efforts to tackle the Covid-19 crisis, causing the delay to the purchase of the two submarines.

The signing of the purchase is due in September, Vice Adm Thirakul said.

No Lobbying over submarines

Deputy Prime Minister Prawit Wongsuwon said in Rayong on Monday that there had been no lobbying to get the two submarines approved by the panel. “How could lobbying be possible? It’s the subcommittee’s job,” the Palang Pracharath Party leader said.

Pheu Thai spokesman Anusorn Iemsa-ard on Monday dismissed the navy’s explanation as being of no consequence. The party would not step back from the issue, he said. If necessary they will step up the campaign to sink the project.

He also warned of street protests against the procurement.