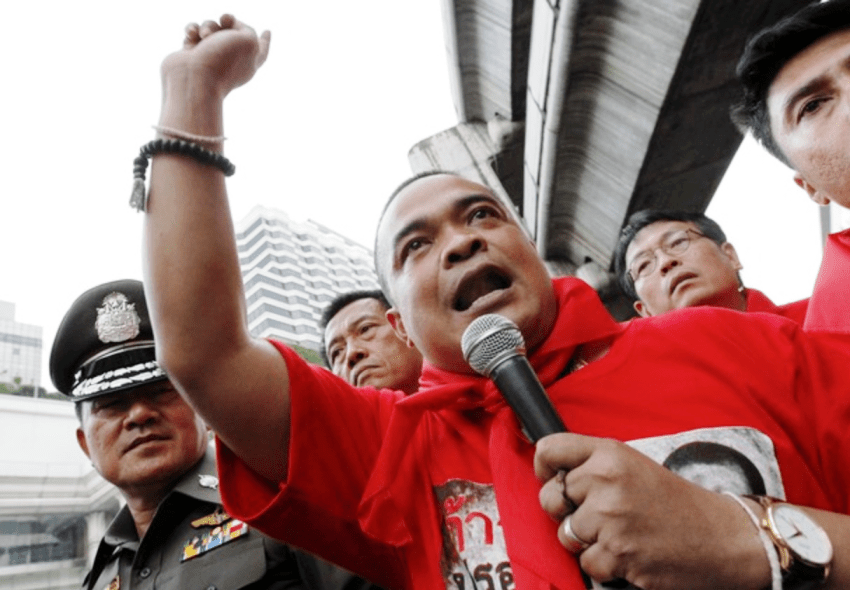 Student Anti-Government activists who have been rallying across Thailand have been told to refrain from mentioning the monarchy or they could face a public backlash. The warning came for Jatuporn Prompan, chairman of the United Front for Democracy against Dictatorship (UDD). Jatuporn is a Thai politician and also a Red Shirt leader.

Speaking to the House committee on national reconciliation, Mr Jatuporn said the students must not drag the monarchy into their activism. If they did, the movement would be weakened because citizens would not accept it.

“It would end with huge losses like in the past,” Mr Jatuporn said. He is understood to be referring to the student protests in the 1970s.

The students need to steer clear of the topic of the monarchy and stick to their three demands. Student are demanding charter changes, dissolution of the House and also a stop to violations of people’s freedoms. If the involve the Monarchy they will be defeated, he said.

The students will likely lose support from many if they offend the high institution, Mr Jatuporn added.

Thailand will always be governed by a constitutional monarchy

He insisted he does not intend to breathe fear among the student activists. He said he was concerned about the consequences of their actions if they are deemed offensive to the monarchy. Jatuporn was referring to article 112.

“I’d like to ask these students to keep a clear head and bear in mind. Adding that Thailand will [always] be governed by a constitutional monarchy. Furthermore that the people serve as [the kingdom’s] guard,” Mr Jatuporn said.

He said their three demands could be discussed through parliamentary channels. Also noting their call for the dissolution of the House and the amendments to the charter were contradictory.

According to Mr Jatuporn, disbanding the House would require either constitutional amendments or would come about through a general election. An Election which would be governed by current rules that were modified by the Junta Government. Prime Minister General Prayut Chan-ocha and his Junta Government are accused of manipulating the voting electorate to remain in power.

Meanwhile, Piyabutr Saengkanokkul, co-founder of the Progressive Movement, took to Facebook on Thursday to ask if the authorities were genuinely ready to listen to the voices of young people. Problems have been accumulated through the generations. Furthermore which everyone had a part in creating, Mr Piyabutr said. Also adding those problems are now being passed on to young people.

“If we are willing to open our minds to the voices of young people, we should also get down to finding a solution for this country together,” he said. The House of Representatives on Thursday voted 260-178 to set up a committee to listen to the students.