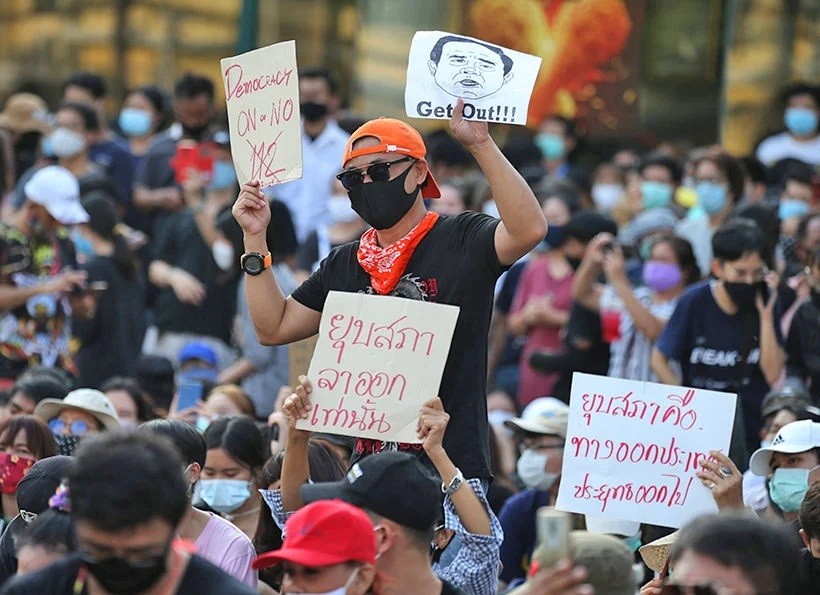 In a string of protests staged across Thailand this week, thousands of students revived the country’s youth-led pro-democracy movement. All amidst the coronavirus pandemic and demanded the resignation of Thai Army-backed Prime Minister Prayuth Chan-ocha.

Wearing uniform black T-shirts and face masks, demonstrators were seen at different protest sites holding up the iconic three finger salute from the ‘Hunger Games’ film franchise, which became a symbol of liberation in Thailand soon after the military coup in 2014.

Anti-government rap songs and chants of “Get Out” echoed outside Thai schools and universities. As protestors called for the dissolution of the parliament and the rewriting of the constitution.

The demonstrations first began on Saturday, when around 3,000 young people — led by the student coalition group Free Youth — assembled at Bangkok’s historic Democracy Monument. In the days that followed, smaller protests broke out in cities and towns across the country.

Thai Army Chief General Apirat Kongsompong on Friday alleged that the spate of youth-led protests were most likely part of a larger political conspiracy. While he vowed to allow protests to continue without military interference, Kongsompong claimed that security forces would still need to closely monitor these movements, Bloomberg reported.

Why are young people protesting against the Thai government?

With the government yet to address the protestors’ grievances, Thailand’s recent ‘youthquake’ shows no signs of weakening. According to Free Youth, several more demonstrations are planned over the weekend.

The Free Youth protestors first outlined their three big demands at the Democracy Monument last Saturday — first, they called for the resignation of Chan-ocha and the dissolution of the parliament; second, they demanded the rewriting of the constitution; and third, they urged authorities to stop intimidating activists for exercising their freedom of expression.

Another factor that has fuelled the recent youth-led anti-government movement is the economic impact of the ongoing Covid-19 pandemic, which has also brought the country’s otherwise thriving tourism industry to a complete standstill. According to the Bank of Thailand, the country’s economy is expected to contract by a minimum of 8% this year, Reuters reported.

A Thai police officer stands next to demonstrators, who hold up three finger salute, a sign of protest. (Reuters Photo: Jorge Silva)

Due to a coronavirus-induced recession, thousands have been rendered jobless. Students, particularly graduates, find themselves especially vulnerable as they have few to no jobs to choose from. Many denounced the country’s leadership for failing to reverse the economic damage caused by the pandemic.

The situation is made worse by the emergency decree imposed by the countries’ prime minister. The decree strictly prohibits public assembly, stops people from leaving their homes, and also includes a clause to prevent the spread of misinformation that may cause public fear.

According to reports, another month-long extension is expected despite the fact that Thailand is one of the few countries that has successfully been able to contain the spread of the virus.

Critics have accused the Thai government of using the decree as a tool to prevent dissent and public protests such as these. Ever since the military coup in 2014, which brought Chan-ocha to power, the government has aggressively cracked down on pro-democracy protestors. Over the last few years the government has even been accused of abducting critics and activists.

In June, the disappearance of 37-year-old Wanchalearm Satsaksit — a member of the pro-democracy social movement ‘Red Shirts — sparked outrage amongst the country’s youth. Several other exiled Thai critics have allegedly been snatched off the streets in neighbouring countries in recent years. In 2018, the bodies of two missing activists were found floating in the Mekong river.

Many young people protesting today claim they are frustrated by the lack of pro-people reforms and years of economic stagnation. The countries’ stringent lèse majesté laws, which make defaming or insulting the king an illegal offence, have also shrunk the space for dissent considerably.

Thailand’s political scene has been wrecked by years of crises and coups. The coup in 2014 was one among over 12 that have been staged by the Thai army since the end of absolute monarchy in 1932. The last military take-over took place in 2006, when the government led by Thaksin Shinawatra was toppled by the army. His sister Yingluck Shinawatra was Prime Minister during the 2014 coup.

On May 22, 2014, then-army chief Prayuth Chan-ocha announced that after months of political turmoil in the country, the military had seized power of the government and had suspended the constitution. He promised to restore order, before suspending TV broadcasting and banning political gatherings. A nationwide curfew was enforced.

The crises first began earlier that year, when Shinawatra ordered the dissolution of the lower house of parliament. In May, a court ordered her removal for alleged abuse of power. Chan-ocha quickly replaced Shinawatra and declared himself Thailand’s premier. Despite curfews and overwhelming military presence on the streets, protests led by ordinary citizens spontaneously broke out across the country.

Following the coup, a hand-picked legislature was set in place, comprising mostly military and police officials. An interim constitution, issued in July, gave the military sweeping powers. Under Chan-ocha’s leadership, the army and the royalist elite have joined forces and consolidated power.

Last year, the country witnessed its first elections since the army coup. Young people turned up in overwhelming numbers to vote for change — they wanted a political revamp led by a progressive pro-democracy party. But a military-drafted constitution kept this from happening.

What’s the History of pro-democracy protests in Thailand?

Despite winning more seats than anyone else in parliament, Thailand’s main opposition — Pheu Thai — didn’t get to choose the country’s next leader. The 250-seat senate was chosen entirely by the military, which unsurprisingly voted to keep junta leader Chan-ocha in office.

The country’s youth was dismayed when he was re-elected in 2019. The hashtags #RIPTHAILAND and #NotMyPM trended on Twitter for days after the results were announced. Despite his unpopularity among sections of Thai youth, the 65-year-old former general has become one the countries’ longest-serving leaders in history.

The pro-democracy rallies seen this week did not emerge out of thin air, the protestors merely picked up where they left off earlier this year, before public assemblies were abruptly halted due to the pandemic.

Students gathered on college campuses across the country to express their anger and frustration at the Thai government’s decision. They accused the country’s leadership of being undemocratic and demanded Chan-ocha’s resignation.

The young pro-democracy demonstrators who stormed the streets this year, are vastly different from the ‘Red Shirt’ protestors that preceded them. The Red Shirts, formally known as the United Front for Democracy Against Dictatorship (UDD), was a political movement formed after the 2006 coup.

The group mostly consisted of rural workers who demanded the reinstatement of the then-deposed PM Thaksin Shinawatra. They also protested against the harsh living conditions in Thailand’s countryside.

In contrast, today’s young protestors come from relatively privileged backgrounds and reside in some of the countries’ biggest cities and towns. Their methods are similar to those of protestors in the 1960s, who are considered Thailand’s first generation of student demonstrators.

Protests in the 60s were launched by young people who were disillusioned with the rampant corruption and elitism that dominated politics and instead desired democratic and progressive leadership.

The student movements that followed were better organised and have been a permanent fixture in Thailand’s political scene. Student unions in universities and groups like the National Student Center of Thailand (NSCT, 1968-1976) and the Student Federation of Thailand (SFT, 1984-early 2000) left an indelible mark in Thai politics.

Unable to gather in public during the Covid-19 pandemic, student protests took their revolt online. Thai youth used Twitter as a platform to voice their dissent and even forge an alliance with pro-democracy protestors in Hong Kong. Hashtags like #nnevy and #MilkTea alliance were used by protestors from both countries to counter Chinese nationalist trolls.