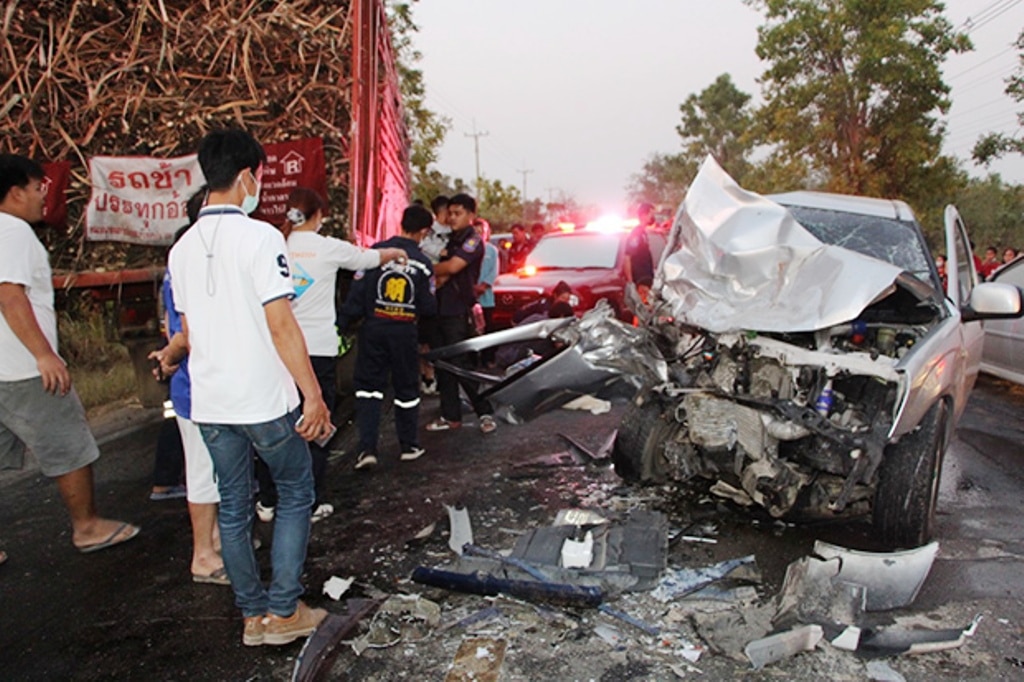 Police in central Thailand have reported one person was killed and three others injured in an accident involving a 10-wheel freight truck and two pickups in Ratchaburi on Sunday.

Pol Capt Sam-ang Suppatanand, a duty officer at Khao Din in Photharam district, said the accident occurred about 6.30pm on a local road near Moo 5 village in tambon Nang Kaew.

A passenger in the 10-wheel freight truck, Suporn Thuengkho, 50, told police they were delivering a load of sugarcane to Ban Pong district, travelling behind a blue four-door Isuzu pickup.

A bronze Isuzu pickup coming towards them swayed across the middle line and crashed into the four-door pickup, which was spun around by the impact and the truck ran into it, hitting it on the right side.

The driver of the oncoming bronze pickup, identified later as Prasan Chiewchan, 58, was crushed to death inside his vehicle. The male driver of the four-door pickup and two passengers, a man and a woman, were injured. They were admitted to Photharam Hospital.

Yesterday a  forest ranger was killed after a four-door pick-up he was travelling in plunged into a ditch along a local road in Muang district of Ratchaburi late on Sunday night, police said.

Pol Capt Pipat Paenghom, a duty officer at Muang police station, said the accident occurred at about 10.30pm at a three-way junction near Moo 5 village in tambon Nam Phu.

When police and rescuers arrived at the scene, they found the pick-up had plunged head-first into the ditch. When the driver was removed from the vehicle by rescuers, he was found dead, his neck broken.

From documents found on him, the man was identified as Chatchawal Ngoenngam, 43, a ranger of a forest protection unit from Buri Ram’s Non Din Daeng district.

Police were investigating to find the cause of the road accident.

Local residents said similar accidents frequently happened at that location, especially at night, because there was no sign warning motorists that a T-junction was ahead, resulting in some driving straight into the ditch.