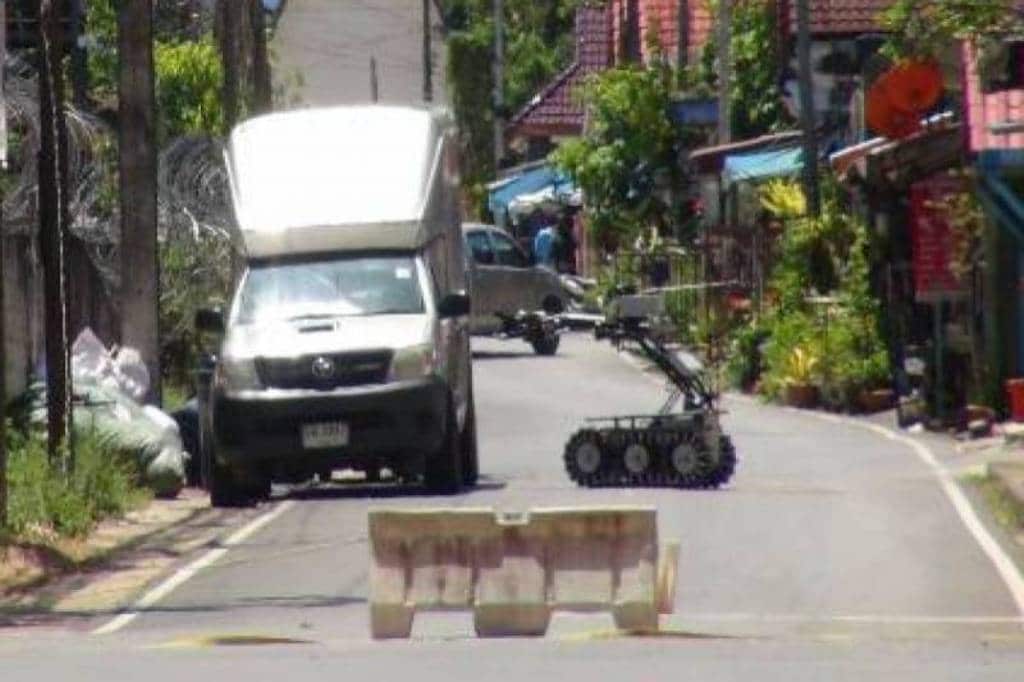 Police in Southern Thailand have defused bombs that were found in a stolen delivery truck parked behind a police station in Yala. Police in Yala said the delivery truck was stolen on Friday morning by a group of armed men.

According to Yala Police Mr Baihakee Longluwa, a delivery truck driver for Kerry Express, was carrying a parcel to a house in Yala when five armed men suddenly walked towards him and held him at gunpoint. They pushed him inside the house and tied his hands before fleeing in the pickup.

Mr Baihakee later freed himself and reported the incident to the local police station. Col Pol Kriattisak Neewong, spokesman for the Region 4 Forward Command of the Internal Security Operations Command (Isoc) told CTN News by phone that soldiers were dispatched to intercept the stolen vehicle.

The entire area was cordoned off and a team of bomb disposal officers was called to examine the pickup truck. They found home-made bombs stuffed in two cooking gas cylinders placed below the driver’s seat.

Another home-made bomb stuffed in a bottle of a mosquito repellent which was found in a garbage bin near the pickup truck. The bomb disposal officers safely destroyed the explosives, Col Kriatisak said.

Police examined CCTV video and found that the stolen vehicle had driven past the Parameetae intersection in tambon Budee in Muang district of Yala at 9.25am on Friday. The vehicle was parked behind the Raman police station at 10.15am.

A black motorcycle was seen arriving in the area to pick up a man who had driven the stolen vehicle to park there.

In another related incident, an unknown number of suspects reportedly burned car tires and stole surveillance cameras installed on power poles in Than To and Muang districts of Yala.

In Than To, a village defence team found burned tires at two locations at 6.23am on Saturday. There was spray-painting at one location, and five CCTV cameras, three 4G devices and two WiFi devices were stolen.

In Muang district of Yala, burned car tires were found on two roads. On suspicious object was also found on a road there.