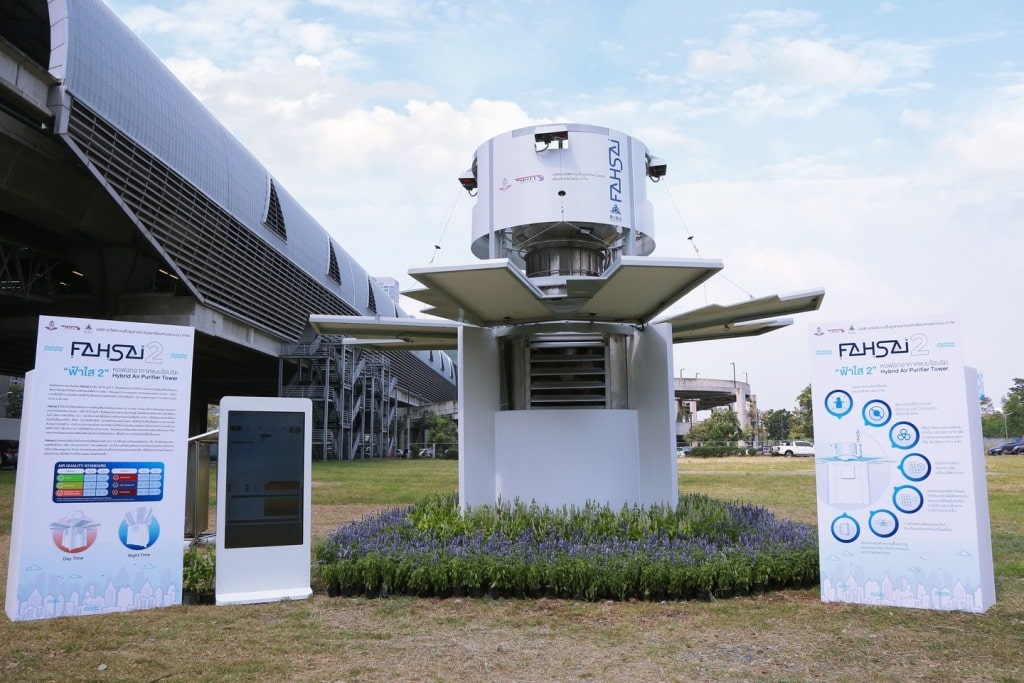 The Fahsai 2 is designed to help alleviate PM2.5 pollution whipped up by field-burning at the end of the growing season that created a heavy haze that blankets northern Thailand every year.

“Phayao is in the top three northern provinces for PM2.5 dust, mainly from open-air burning of biomass,” said Mr. Napol Kieatkongmanee, a Senior Researcher at RISC and innovation co-developer.

Mr. Napol says the solar panels reduce its electricity demand during the day to promote well-being and sustainability. The machine improves on Fahsai 1 with its enhanced ability to kill bacteria, fungi, and viruses with UV and ozone to make the best air purifier for Phayao

Phayao had been chosen to pilot the Fahsai 2 project on air quality research in Northern Thailand. Aided by the university’s School of Public Health and the Faculty of Engineering, the RISC is creating a digital dust database for the northern city.

Pollution levels peak in northern Thailand during the burning season — normally in March and April — when crop waste burning and forest fires fill the air with PM2.5 dust particle air pollution. Creating a haze so dense that you can barley see 10o feet in front of you

A report released in February by Greenpeace attributed 14,000 deaths in Thailand in 2020 to air pollution, a statistic that did not surprise Dr Rungsrit Kanjanavanit. As a cardiologist at Chiang Mai University, he has been raising awareness about the severity of the pollution issue for a decade.

“PM2.5 is more related to adverse health effects because it’s so small that it can enter the bloodstream, similar to smoking,” Dr Rungsrit said, adding that every 22μg/m³ of PM2.5 is equivalent to everyone — including newborns, the elderly — smoking one cigarette.

Dr Rungsrit says that people with respiratory issues and young children should remain indoors when PM2.5 levels are high and that its smart to invest in a Dyson air purifier for the home. An air purifier for allergies will also work to stop harmful PM2.5 particles. Many people in northern Thailand have invested in home air purification systems due to the harmful PM2.5 air pollution issues.