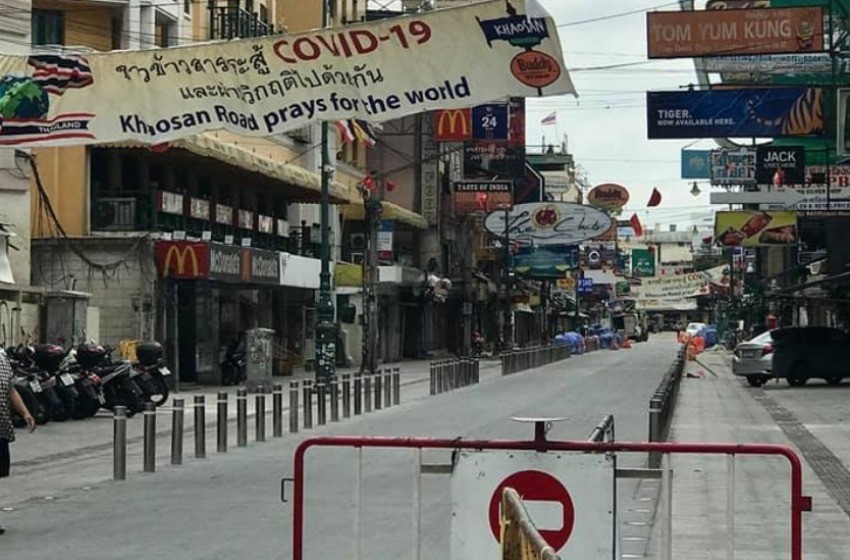 Hotels are shuttered in the dark, bars are closed and empty food carts are seen around Bangkok’s once-bustling with foreign tourists. The silence shrouds the city’s party land despite the easing COVID-19 lockdown measures.

“Bangkok at night is deserted as never before. I can’t believe it is a tourist haven where I’ve been living all my life. It’s almost a ghost town,” said local resident Anan who lives near Sukhumvit 24. An area home to starred hotels, large shopping malls, high-end and popular restaurants in central Bangkok.

Thailand has recorded no local transmission of COVID-19 for 35 consecutive days with all of the recorded infections being Thais returning from abroad.

Although the curfew imposed since April to contain coronavirus has been lifted and most businesses are allowed to open, most of them kept their doors closed.

“I sat around here the whole day. You’re the second visitor to the shop. Foreigners are major visitors here, but now we could hardly see them,” Apple, a masseuse in downtown Bangkok, told Xinhua.

“I got only 30 percent of my normal earnings, which could barely afford meals, but better than nothing,” said the 45-year-old with two children under 10.

Absence of foreign tourists in Bangkok

Apple left her hometown in southern Thailand and went back to Bangkok on June 1 when the country allowed massage parlors to reopen. “I can’t wait any more,” she said.

“The absence of foreign tourists means business is still very slow. We recalled only five workers from 15 of them,” said Rada, owner of the massage parlor.

“We are operating at a loss, but we have to reopen to survive till foreign tourists return,” said Rada with a bitter smile who offered a free coupon for every visitor at her parlor.

Rada is not the only one who tries all her ways to woo the customers back. Grand sales are seen in every shopping mall in the city, offering the best deal of the year with discounts up to 90 percent.

With no foreign tourists, tourism hotspots like Pattaya and Phuket have been hit even harder than Bangkok.

Tourism contributes to 18 percent of the country’s GDP, of which 12 percent or 2 trillion baht (about 66 billion U.S. dollars) comes from international tourists.

Most tourist businesses are set up for foreign visitors. Without international tourists, most hotels, shops and restaurants have to shut their doors and many face business collapse.

In the first five months this year, Thailand takes in about 17 billion dollars, a 57-percent drop from last year. The state planning agency estimates the country’s economy will shrink 5 percent to 6 percent this year. Its worst performance since the 1997-1998 Asian financial crisis.

“The tourism sector of Thailand is in the plight of oversupply due to the absence of foreign tourists. To make it survive and fill the void of the foreign market, the cabinet has approved stimulus packages worth about 740 million dollars,” Yuthasak Supaporn, governor of the Tourism Authority of Thailand (TAT), told Xinhua.

He said the government will offer coupons on accommodation, transport, food and tourist attractions to stimulate 2 million domestic trips from July to October.

To regain tourist confidence, the TAT has set up Safety and Health Administration (SHA) certification for tourism business on hygiene, health and cleanliness. The TAT expects 70 percent of the tourism supply chain will join the new safety standards in two years.

The government also floated an idea to help hard-hit hotels by encouraging them to offer “alternative quarantine” to a limited group of foreign travelers to the country.

Foreign business people who registered for a self-funded covid-19 isolation package at luxury hotels, known as “alternative state quarantine,” are permitted to fly into the country. Hotels can sell them with upgraded accommodation and private doctor consultations.

The current phase of border reopening is strictly limited to business trips. Skilled workers, expats with Thai families, students, and teachers are expected to be covered in the next phase, which may take place on July 1.

Meanwhile, ways in which the country can safely allow the return of tourists are being reviewed. Among them is the idea of “travel bubbles.” The bubbles would involve reciprocal travel arrangements with other countries. Only countries that have shown they can effectively contain the COVID-19 pandemic.

According to spokesman for the government’s Centre for COVID-19 Situation Administration Taweesin Wisanuyothin, short-term business travellers from China, Japan, South Korea and Singapore might be allowed back without having to spend 14 days in quarantine.

The relax of immigration rules

He said the Covid-19 “travel bubbles” idea has not been finalized but it was clear that it would not allow hundreds of thousands of foreign tourists to visit Thailand per year. Adding that the plan will not be rolled out before August.

“The plan needs more talks, the fear of further outbreak still haunts tourism demand. The relax of immigration rules will be step by step. Probably starting from limited destinations like Bangkok, Pattaya and Phuket,” said the TAT governor.

“Tourism sector will be reset in the pandemic. We are turning away from mass tourism. Targeting wealthy groups, balancing the domestic and international markets will be the trend,” he said.

“It will not return to the past when the influx of international travellers created euphoric sentiment for the country,” said Annan. He just ended his second trip with his family around the country within two weeks.

School closure continues. Hotels and meals are in exaggerate discount. It’s golden time to travel with your kids everywhere in Thailand without being disturbed by noisy tour crowds, he said.

“Gone is humanity, the crowds, the diners, the drunks. What a time of hard-won quietness! Yet I miss the roar of tuk-tuk cars at midnight, the noisy street full of bewildered foreign tourists. Also touting vendors-the messy charm of the city,” said Annan.

“We are expecting Bangkok to return to what it was before. However, the empty streets remind me that the fun and charm of Bangkok will depart for a long time,” said Annan. Enditem