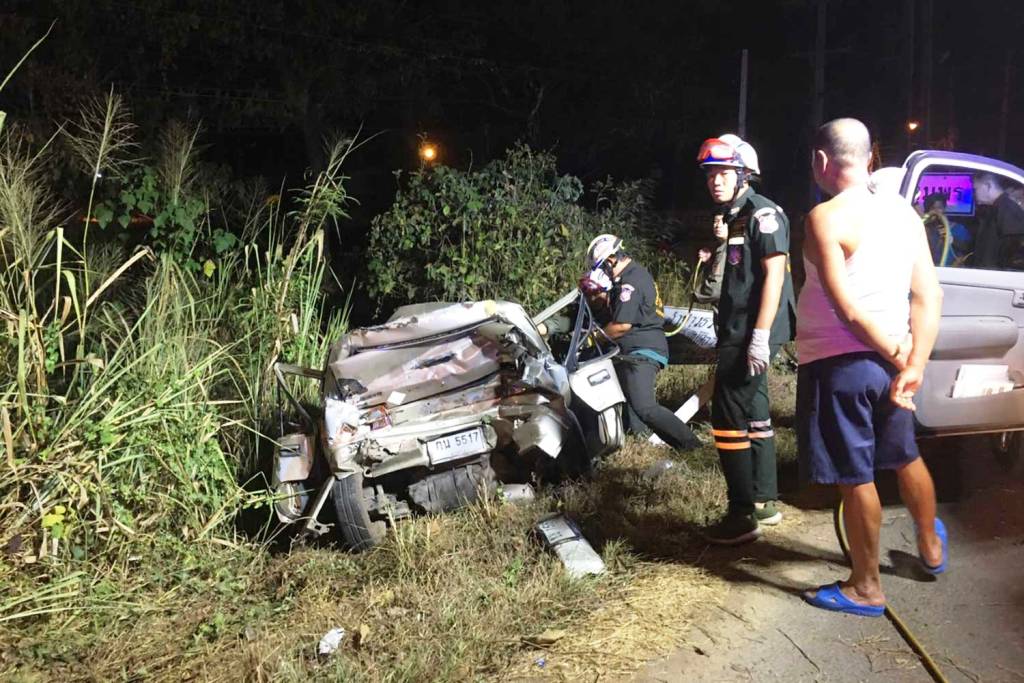 A 55 year-old woman was killed and her husband seriously injured when their car was rear-ended by a speeding pickup in Northern Thailand, Tuesday night. The accident occurred about 9.30pm on the Lampang-Phayao road.

Pol Lt Col Kamol Kid-an, told Thai media that witnesses said the car was travelling out of Lampang in the far left lane. It was hit from behind by a speeding Isuzu pickup going in the same direction.

The violent impact drove the car off the road, seriously injuring the car’s driver and killing his wife. She was riding in the front passenger seat of the car.

The rear section of the car was badly crumpled and the front also damaged. Consequently rescuers used a hydraulic jack to force open the wreckage and extract the couple.

The pickup driver, identified only as Sakchai, 25, was taken to Lampang Hospital for a blood test to determine if he was driving under the influence.

last week Police in Lampang province reported that Thai Big Bike rider has been decapitated after crashing his Motorcycle. The horrific accident occurred about 1pm on the Lampang to Chiang Mai Superhighway.

Upon arriving at the accident scene police and rescue services were confronted with a horrific sight. The Thai biker on a Kawasaki Z650 collided with a metal lamp post in the middle of a downward hill section of the Superhighway.

The Thai big bike riders head – now out of its helmet – was on one side of the road, furthermore his body was on the other side, the Thaiger reports.

Thailand has seen fewer road casualties this year but remains the world’s ninth-most dangerous nation for road accidents. According to the World Health Organisation (WHO) every day road accidents claim an average of 60 lives in Thailand. The WHO Global Status Report on Road Safety shows, no Asean nation has a higher road fatality rate.

According to statistics from Thai authorities, drunk driving, speeding are among the main causes of accidents deaths.

Thai Monk Arrested and Disrobed for Calling in Bomb Scare