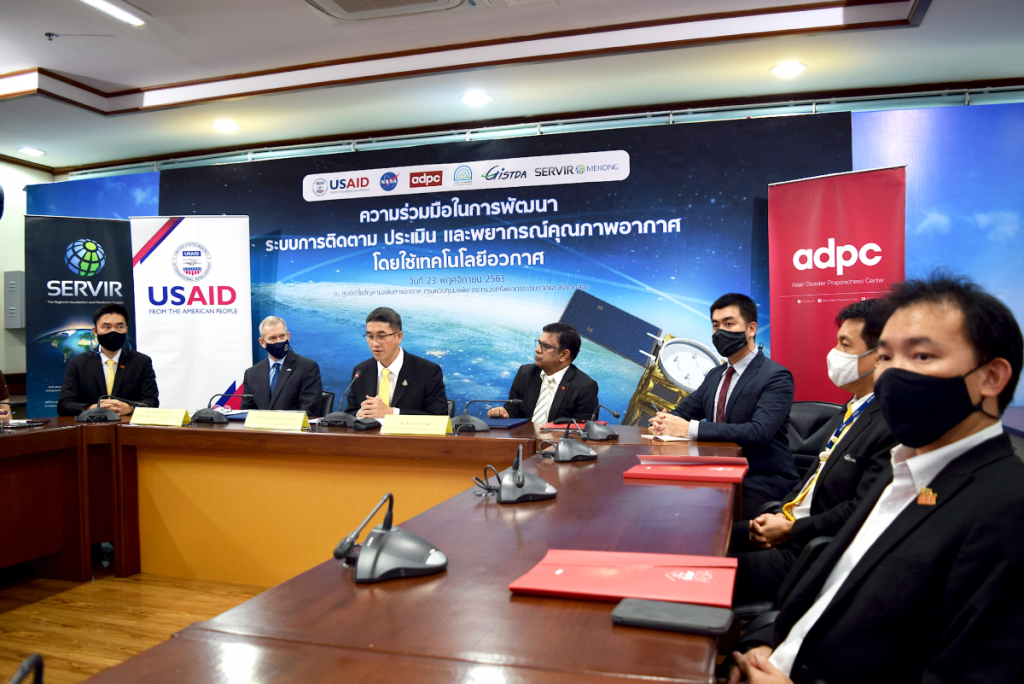 The new tool was developed by SERVIR-Mekong, a partnership between the U.S. Agency for International Development (USAID) and the U.S. National Aeronautics and Space Administration (NASA), in collaboration with the Royal Thai Government’s Pollution Control Department (PCD) and the Geo-Informatics and Space Technology Development Agency (GISTDA).

Currently, air quality in Thailand is measured using a small number of local monitoring stations. By using satellite data, the Royal Thai Government can collect data across a larger area to fill in the data gaps and capture a more accurate view of the air quality across Thailand, not just in urban centers. At a press event hosted on November 23 by the PCD, USAID Regional Development Mission for Asia Director Dr. Steven G. Olive said, “Poor air quality is a serious seasonal problem in Thailand that has persisted for over a decade.

Through the SERVIR-Mekong project, USAID is pleased to help improve air quality monitoring throughout Thailand and the region and to disseminate this information to the public through the Air Quality Explorer Tool. In addition to providing Thailand with more accurate air pollution readings, this tool also has the potential to address the transboundary challenges that air pollution poses to the region.”

Since 2013, SERVIR-Mekong has supported governments, regional institutions, and other key stakeholders in lower Mekong countries to use publicly available satellite data to prepare for and respond to disasters, manage natural resources, and improve food security. The project has worked with the PCD and GISTDA for nearly two years to develop the Air Quality Explorer Tool.

The United States Agency for International Development (USAID) is the principal U.S. government agency extending assistance to countries worldwide recovering from disaster, trying to escape poverty and engaging in governance reforms. USAID’s Regional Development Mission for Asia, based in Bangkok, oversees a broad portfolio of regional and transnational programs, and provides support to several USAID bilateral missions in Asia as well as manages programs in countries in which it does not have a permanent presence.

Its regional approach addresses transnational problems such as human and wildlife trafficking, emerging infectious diseases, malaria, and HIV/AIDS. Please visit www.usaid.gov/asia-regional or @USAIDAsia on Facebook and Twitter for more information.

SERVIR-Mekong is a joint initiative of the U.S. Agency for International Development (USAID) and the U.S. National Aeronautics and Space Administration (NASA), implemented by the Geospatial Information Department of the Asian Disaster Preparedness Center (ADPC). SERVIR-Mekong makes use of publicly available satellite imagery and technologies to address challenges related to water resources, disasters, climate resilience, agriculture and ecosystems in the Lower Mekong.