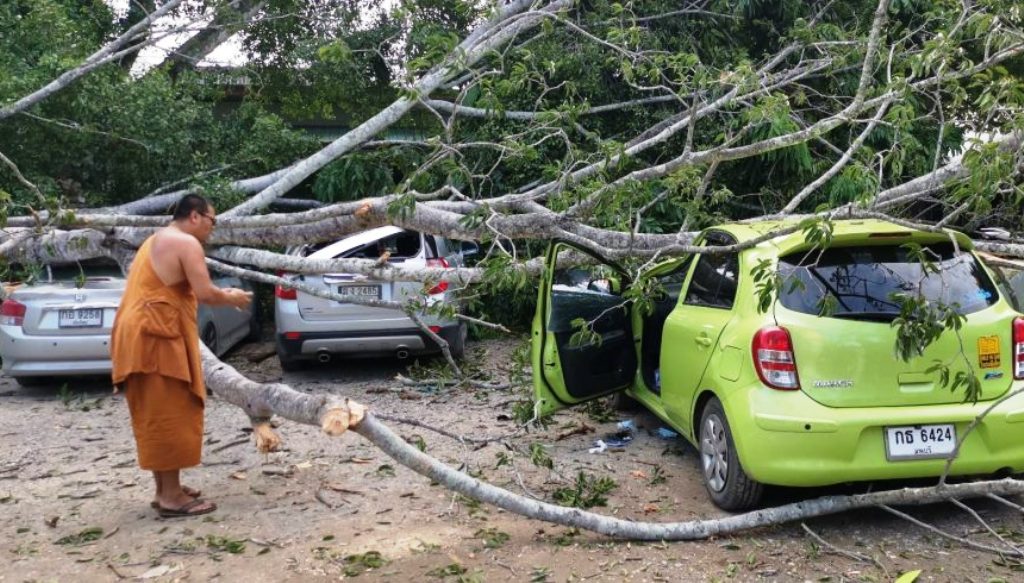 Branch of large banyan tree crashes onto the car park of Wat Pa Daraphirom in Chiang Mai, injuring two tourists. One tourists suffered from concussion and another is critical condition after a branch fell onto her neck.

Eight vehicles were also damaged in the incident at Wat Pa Daraphirom in Chiang Mai.

A local vendor at the temple told CityNews that the crash of the branch shocked everyone at the temple and was thunderous in noise. Initially it was thought that no one was injured, she said, but then they soon saw the people under the branches.

Wat Pa Daraphirom is located at Mae Rim District, Chiang Mai Province. Wat Pa Daraphirom Temple is a must-visit if you go to Mae Rim, Chiang mai. The temple is exceptionally beautiful with impressive historical background. Each building in the temple is unique and distinctive.

The temple is not as crowded as temples in Chiang Mai city. It is mostly quiet and serene. So, you can appreciate its artistic style and beauty peacefully. So, next time you go to Mae Rim, don’t miss Wat Pa Daraphirom Temple. Meanwhile, this coming weekend, the mountainous terrains of Doi Inthanon National Park, Chiang Mai, will see an army of the country’s toughest trail runners participate in the first edition of Thailand by UTMB.

The run takes its inspiration from the Ultra-Trail du Mont-Blanc mountain ultramarathon. In this Thai event, the racecourse is 80km long with a total elevation gain of 4,000m. The participants will be running mostly in the woods but along the way, they will also pass several villages and attractions. If you’re also visiting the park during the same period, you might spot them and can take part in helping cheer them on.

Among the places that the runners can surely be spotted are the park’s headquarters, which is the starting and finishing point, and the twin royal stupas of Phra Maha Dhatu Nabha Metaneedol and Nabhapol Bhumisiri.

Doi Inthanon is a popular national park, especially during the cool season. It’s one of the top destinations for Thai tourists seeking low temperatures and nice mountain scenery as well as birdwatchers who come to catch sight of migratory birds. The summit and ecologically fragile areas such as the Ang Ka and Kiu Mae Pan nature study trails are not included in the racecourse.

If you’re interested to know more about the details of each section of the trail, potential spots where you can watch the racers and get some idea of what is needed to perhaps one day be able to join such a demanding competition yourself, visit Thailand by UTMB’s Facebook page.