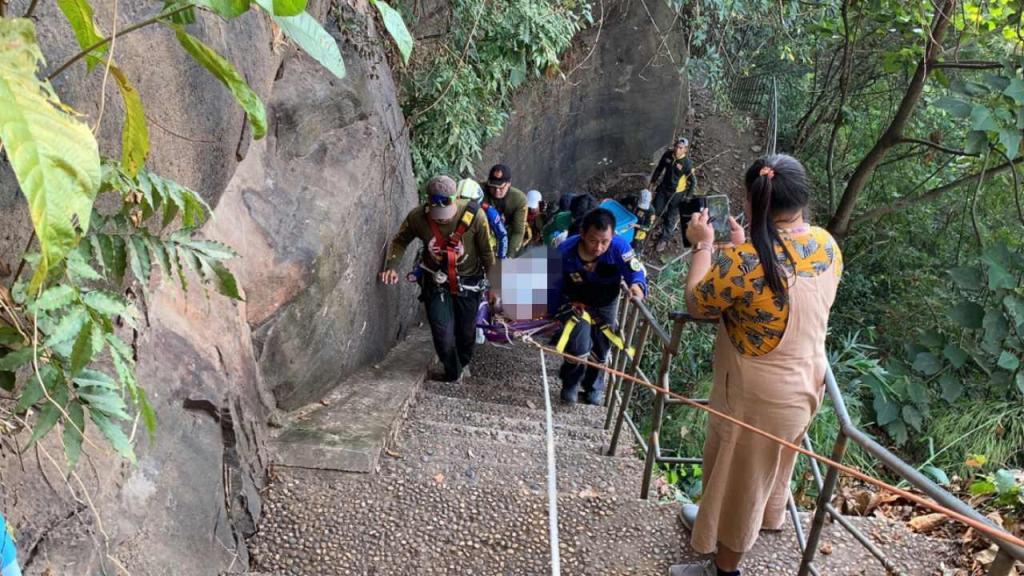 A tourist has died after falling about 30 metres from the top of a popular scenic viewpoint in Nong Khai on Friday afternoon. The accident took place around 2pm after the visitor to Wat Pha Tak Seua had finished taking photos of the Mekong River.

Rescuers who arrived on the scene used ropes to rappel down to the ground about 30 metres below and retrieve the man’s body, which took two hours.

Police identified the victim as Seksan Thimaphan, 52, from Saraburi. He had been visiting the temple with five other friends. The group was planning to go to the glass skywalk, a popular new attraction at the temple overlooking the river.

His friends told police that Seksan decided to go to a nearby rock to take photos first. He finished taking pictures and was walking back towards the path to the skywalk when he lost his balance and fell.

The rock has no safety barriers but it is still a popular site for tourists seeking good photos of the river.

Last month, a visitor also fell to death from a clifftop with no guardrails at Pha Diew Dai, or Lonely Cliff, a famous spot in Khao Yai National Park.

Meanwhile, the Mekong River has fallen to a “worrying level”, in part due to outflow restrictions from Chinese hydropower dams upstream, the Mekong River Commission (MRC) reported on Friday. Once again calling on China to share all of its water data.

The vital waterway has turned blue along the Thai-Lao border, from its usual murky brown colour – signaling shallow water and low levels of nutrition-rich sediment – partially from outflow restrictions from the Jinghong dam in China’s Yunan province, the inter-governmental MRC said.

Friday’s statement said low rainfall and dams on the Lower Mekong and tributaries also contributed to the drop in levels.

“There have been sudden rises and falls in water levels immediately downstream of Jinghong and further down to Vientiane,” said Winai Wongpimool, director of the MRC Secretariat’s Technical Support Division.

Such fluctuations affect fish migration, agriculture and transportation that nearly 70 million people rely on for their livelihoods and food security.