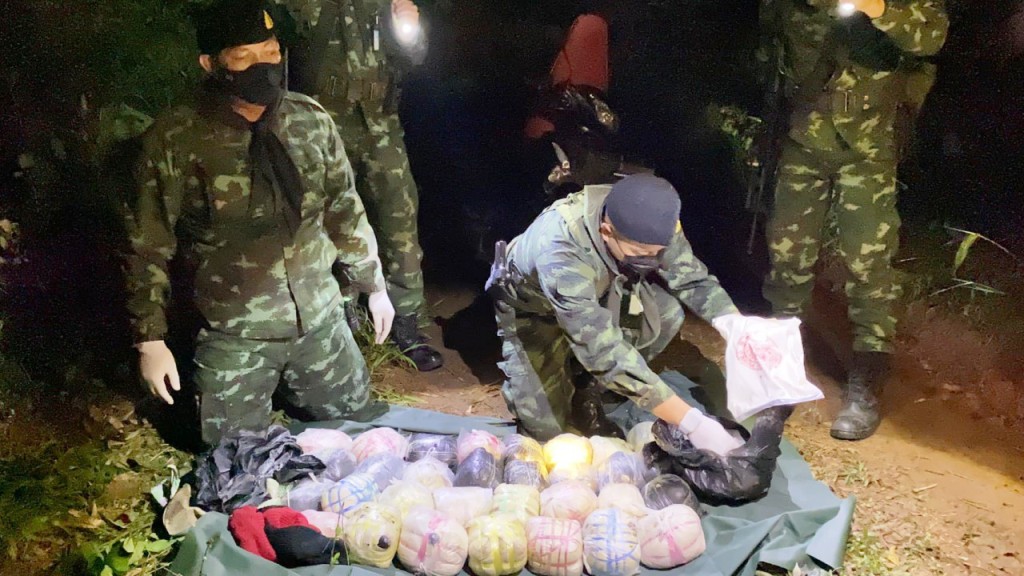 Soldiers from northern Thailand’s Pha Muang Force  have seized about 50 kilograms of raw opium and 500 grams of heroin at a checkpoint in Chiang Mai’s Chai Prakan district on Tuesday night.

There were two bags on the motorcycle, containing 31 packages of raw opium weighing 50.5kg, and a bag with 500g of heroin.

Pol Col Sarawut Khonyai, said the raids were conducted in Tak, Phitsanulok and Sukhothai provinces starting on Monday. They were part of the policy to suppress drug networks during the Covid-19 outbreak.

The first raid was in Tak it came after police expanded their investigation from previous drug cases in the past three years. One case in October 2019 saw the confiscation of 1.5 tons of crystal meth.

The other 2 cases took place in Bangkok, police arrested seized assets worth 100 million baht in December last year; and in Lat Phrao early this month police who also seized 100 kilogram of crystal meth and ketamine during the raid.

The the drug cases were linked to the chief of Phop Phra tambon administrative organization (TAO), identified as Wichit Arphonrungroj. Four warrants were issued for Mr Wichit’s arrest and other accomplices.

So far, police managed to arrest one suspect while Mr Wichit is still on the run.


According to northern Thailand investigators, at least 20 million baht had been wired to one of his bank accounts. Mr Apirak was unable to explain the source of the money.

In Sukhothai, police confiscated two million baht worth of assets from Mr Piyanat Katchamat, a native of Phichit.