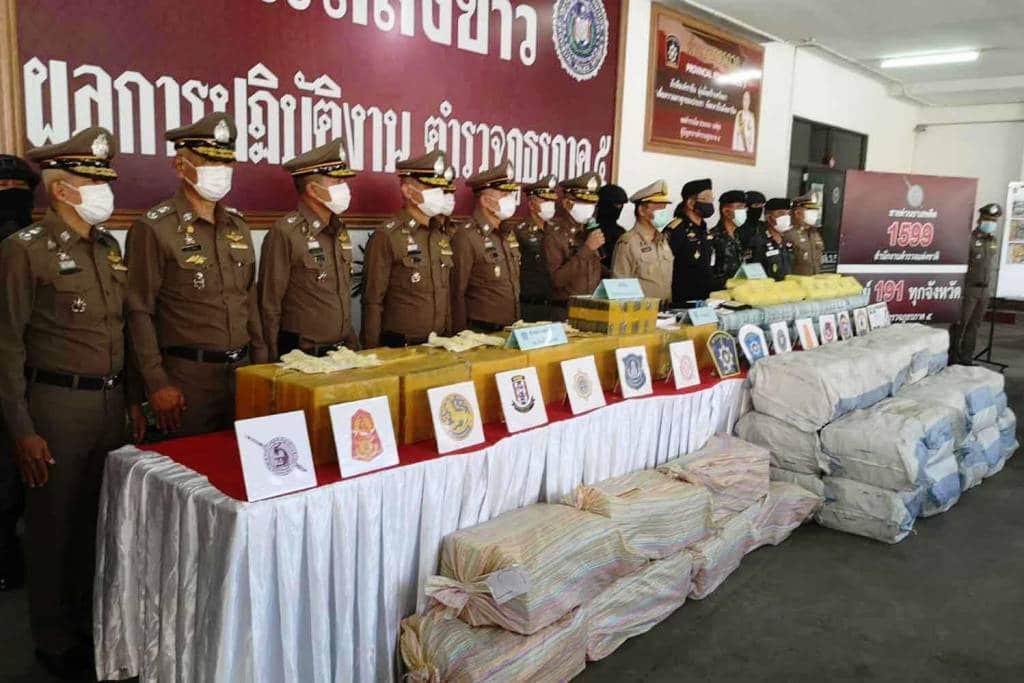 On Sunday, Valentine’s Day, police at the Huay Rai drug checkpoint in Phrae’s Denchai district intercepted a 10-wheel freight truck with a full load of mangoes. A search of the cargo uncovered 1,400 blocks of heroin, weighing 551kg in total. The driver, Mr Preeda Sanguanhong, 29, of Trat province, was arrested.

Pol Gen Suwat Jangyodsuk, the national police chief said the seizure followed a week-long police investigation. Reports surfaced that a large amount of drugs would be smuggled from the northern border.

On Feb 15, at the Huay Rai checkpoint, a 10-wheel freight truck with a load of charcoal was stopped for a search. Police found 8 million meth pills hidden among the charcoal. The driver, Mr Wuthichai Nualket, 34, from Phetchabun, was arrested.

Pol Gen Suwat said the two deliveries were related. The drivers of the two freight trucks were hired by the same person, each to be paid 100,000 baht. They drove the trucks to Phayao province, where the drugs were hidden among the cargoes for delivery to Pathum Thani.

The police chief asked people to act as eyes and ears for police and provide information about drug deliveries to the drugs hotline 1599, emergency hotline 191, [email protected] (Provincial Police Region 5 commissioner) and through the app Police I Lert U.

Thailand and its neighbours along the Mekong River have experienced a continuous expansion of drug production, trafficking and use, particularly of synthetic drugs, for the better part of a decade.

Last year, seizures of harmful methamphetamine in East and Southeast Asia reached 140 tonnes with the vast majority produced in Mynmar’s Shan State across the border from Thailand. With the rise of production there, borders with Thailand and Laos have become one of the most significant drug trafficking points in the world.

It is estimated that drug production and trafficking in the region last year generated profits of at least US$71 billion (2.2 trillion baht), with methamphetamine accounting for US$61 billion (1.9 trillion baht), four times what it was six years ago.

At this point, the production and trafficking of methamphetamine is the financial backbone of transnational organised crime groups and the armed ethnic groups they partner with. They now control control autonomous territories in Myanmar, fueling conflict and insecurity in the country and along its borders including with Thailand.