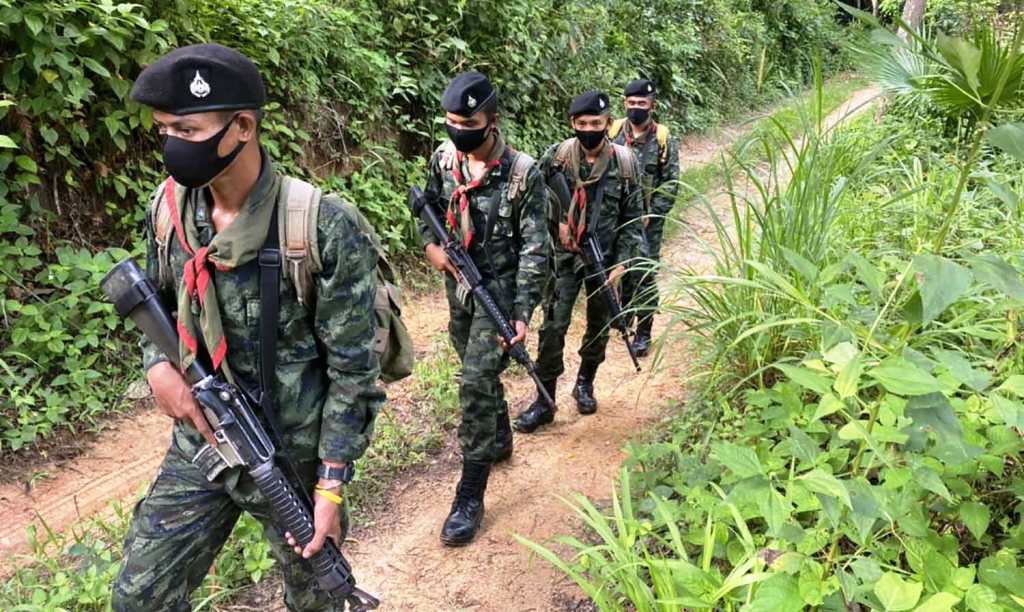 Border police and army soldiers are stepping up patrols in Northern Thailand to prevent border jumpers with covid-19. Authorities are trying to stop people entering the country illegally and halt the spread of Covid-19.

In northeastern Thailand an army patrol arrested 49 illegal Myanmar migrants from Myanmar and their three Myanmar guides early on Tuesday morning near a border village in Kanchanaburi province.

A patrol from the Lat Ya Task Force, guided by information from local informants, found the 25 men and 24 women and their three Myanmar guides hiding near Ban Pratudan, Moo 14 village, in tambon Ban Kao about 2.30am.

None of migrant carried travel documents

In the southern province of Songkhla, combined patrols by the 437th Border Patrol Police Unit and Company 5021 of the 5th Infantry Regiment are deployed along the border with Malaysia, particularly in mountainous areas frequently used by border crossers.

Illegal border crossers, both Thai and foreign nationals, have been caught trying to avoid the Covid-19 screening process and 14-day quarantine. They are seen as high-risk for spreading the virus, especially the Indian and South African variants.

On Monday, 10 Myanmar job seekers were arrested after crossing into Sadao district from Malaysia’s Kedah state.

Apart from regular patrols along the border, checkpoints have been set up along major and secondary roads from the border. A close watch is being kept on border villages.

Meanwhile, Health experts have expressed concern over the coronavirus variant first identified in India being carried into Thailand unchecked by illegal migrants, saying border security needs to be heightened.

“What is worrying us now is the possible arrival of this new coronavirus variant through the country’s border areas, given the fact that more than 15,000 illegal migrant have sneaked in over the past four months,” said Prof Dr Prasit Watanapa, dean of the Faculty of Medicine at Siriraj Hospital.

“So, it is now very critical to step up security measures along the borders shared with Myanmar, Malaysia and Cambodia,” he said. “The Thai-Lao border isn’t as much of a concern.”

Dr Prasit said the most likely route for the B.1.617.1 variant from India to enter Thailand was through the subcontinent and then Myanmar. If unchecked, the variant would then be just one week away from sneaking into Thailand.