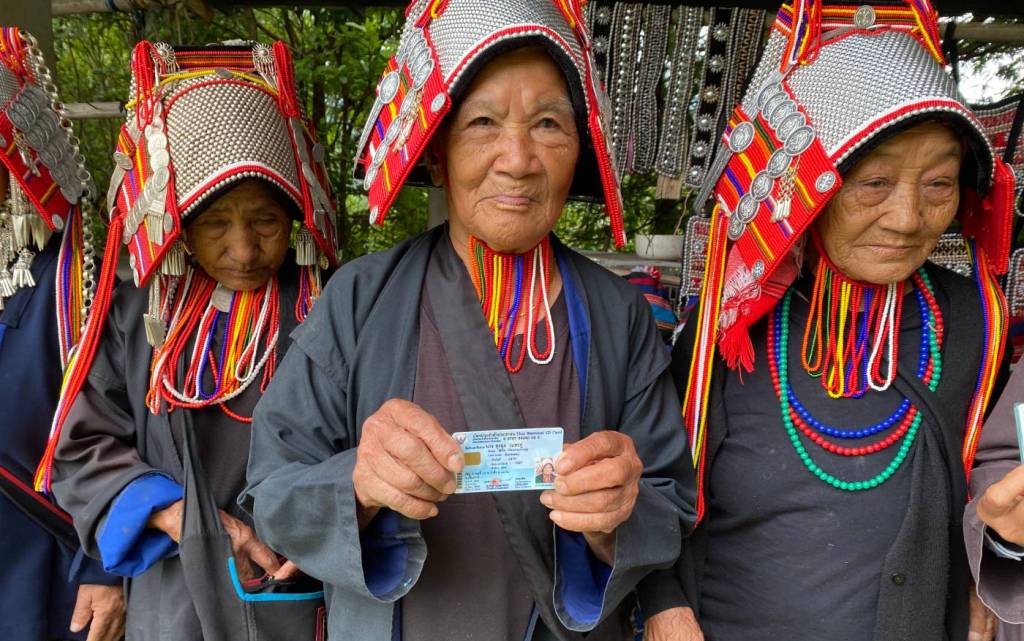 At 93 years, Chungyung Bekaku did not think she would ever get her Thai citizenship after living all her life in the hills of northern Thailand. She lives among other ethnic hilltribe people who are largely regarded as stateless by the government.

Yet Chungyung, who sells handicrafts at a roadside market, secured her Thai citizenship last year. She got her citizenship after a non-profit group helped her do the paperwork that tens of thousands of other elderly hilltribe people in Thailand struggle to do.

“There were many forms to fill, many steps to prove I was born here and have lived here for a long time. I didn’t think I would be successful,” she said, showing her blue Thai ID card.

“I feel very lucky to have got my ID because I also get a monthly government pension, and that makes me feel more secure, especially now when there are so few tourists,” she said, pointing to a pile of unsold embroidered bags and wristbands.

There were about 480,000 people registered as stateless by the Thai government as of June this year. Most are indigenous people living in mountainous border areas, with about 77,000 estimated to be elderly indigenous people.

Thailand has, in recent years, eased its laws to make it easier for stateless people to get citizenship, and to allow access to education, healthcare and birth registration.

Yet the laws largely ignore indigenous people, according to human rights agencies, especially elders who often lack documents such as birth certificates and house deeds.

“The Thai government has been quite proactive in giving rights to the stateless, but for older indigenous people it is still very hard,” said Tuenjai Deetes, 68, a former senator and founder of the Hill Area Development Foundation, a non-profit.

“Nationality should not be an obstruction to a better life or better opportunities. We need an easier, shorter process for those who are eligible, so they can have equal rights as citizens,” she told the Thomson Reuters Foundation.

More than 15 million people worldwide are without a nationality, and a child is born stateless every 10 minutes, according to the Netherlands-based Institute on Statelessness and Inclusion (ISI).

Statelessness is often caused by discrimination on grounds of race, ethnicity, gender, disability and socio-economic status. It is also common where borders are re-drawn. Yet the stateless are among the most under reported populations, according to the United Nations’ refugee agency (UNHCR).

The nearly half a million stateless people in Thailand, the 700,000 Rohingya who fled Myanmar, and the nearly 2 million people who were left off a citizenship registry in India’s Assam state make up some of the largest stateless populations in the world, according to ISI.

In Thailand they include the children of migrant workers who were born in the country, and the nine indigenous hill tribes such as the Akha, Karen, Hmong, Lahu and Lisu who are believed to have migrated from China, Laos and Myanmar centuries ago.

Their status means they have limited work options, they are barred from voting, travelling outside their province, and from buying land. They cannot receive welfare benefits.

“Systemic discrimination” and a failure to register minority ethnic groups in census surveys until the 1960s, are partly responsible for widespread statelessness in Thailand’s north, said Janepicha Cheva-Isarakul, a lecturer at the Victoria University of Wellington who has studied the issue.

“The state’s own bureaucratic practice and insistence on legal documents ignores the lived experience of stateless persons who are left to find a solution for the situation without acknowledging how they end up there,” she said.

Statelessness cannot be solved by expecting people to produce documents they simply do not have, she said.

A Thai official acknowledged that there were “practical problems” such as the lack of documentation, but said applicants could also use DNA tests and reliable witnesses as evidence.

“We have changed the process many times,” said Phitasuang Chanchaichat, director of the Non-Thai Civil Registration and ID Card Division.

“But the big problem is the shortage of staff,” he said, adding that in some districts there were “tens of thousands” of people lining up to apply, but only one district chief.

More than 100,000 registered stateless people in Thailand have received nationality since 2008, and the Southeast Asian nation has endorsed UNHCR’s global campaign to end statelessness by 2024.

The government last year revised its guidelines to provide a pathway to Thai nationality for more than 60,000 stateless students in the country. It has also reduced the burden of proof required for the stateless elderly.

The reforms to Thailand’s nationality and civil registration laws, and the adoption of a “progressive nationality strategy” make the country a regional leader in reducing statelessness, said Jennifer Harrison, a spokeswoman at the UNHCR in Bangkok.

“Ending statelessness is achievable. There is strong momentum and Thailand has demonstrated strong commitment.” Last month, a committee in the northern city of Chiang Rai met with 23 indigenous elders and approved their nationality applications under the newly revised guidelines. Two elders had died while waiting to meet the committee.

“It is still a long and laborious process for the elderly who may be illiterate, don’t speak the language and don’t know how to navigate the process,” said Tuenjai, who has worked among the hill tribes since the 1970s.

“Even their children sometimes think: they are already old, what is the point? But every individual has the right to citizenship, and the freedom and dignity that it brings,” she told Reuters.

In Had Bay village on the Thai-Laos border, Tuenjai and her team met with elderly indigenous stateless people in the temple to go over their documents, after offering Buddhist prayers.

Sook Tummarong, 85, has no proof of her birth in Thailand, nor does she have two witnesses who can attest to the fact. “I am already old. I have waited all my life, but I do not know if I will ever get Thai citizenship,” she said.

Fuel Tanker Overturns and Burst into Flames in Northern Thailand