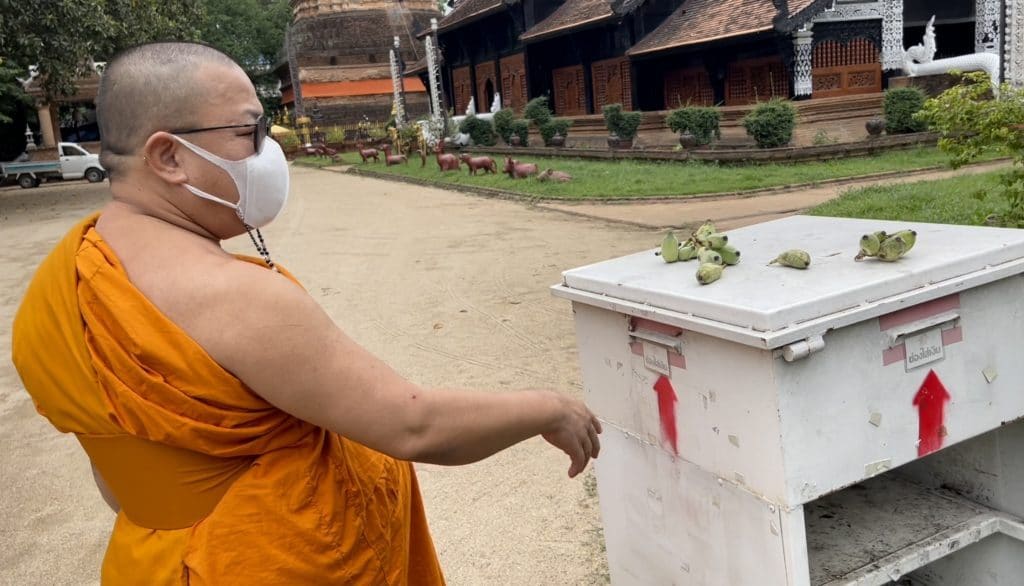 A famous temple in northern Thailand’s Chiang Mai province has been forced to close its food happiness box program due to abuse from greedy and selfish people abusing the charity.

The abbot of Wat Lok Molee temple announced that he had to close the food and supplies line at the temple due to a number of people who are not truly in need abusing it.

Wat Lok Molee temple in Chiang Mai has played a key role in helping our city’s most vulnerable over the past pandemic. It has offered free food, life and work skill classes for free as well as other services and support for the destitute.

A ‘Happiness Box’ has been set up in front of the temple, with people donating food and goods to it so that those in need can come help themselves.

Sadly, the abbot has had to announce today that the box will be moved inside the temple as there have been people whom he calls professional regulars who come to take items on a daily basis.

He told CityNews that often it is simply the same people who come and sit there waiting to scoop up any new deliveries and he fears that these are not actual people in need. He is also concerned about the spread of Covid as long queues have been formed.

From tomorrow onwards, he said, Wat Lok Molee temple will distribute sets of goods and food, ensuring only one set goes to each person.

The abbot said that it was disheartening to see some people so selfishly take everything they can, while knowing that there are people in greater need.

After 83 days of leaving the Happiness Box outside, it will now be closely monitored and distributed from inside the temple.

Meanwhile, as the covid-19 lockdown in Thailand continues poor people in need of food are being aided by community pantries. The community pantries have been popping up Nation wide to help feed the poor in these troubled times.

You can now see them in several locations in the country, as people help one another make ends meet after the coronavirus has crippled the economy.

The new sharing scheme follows the free meals offered by temples and other donors.

It’s not clear exactly when the first community pantry appeared in Thailand. The idea has been seen in other countries, including the United Kingdom.

Its a good way to help people who have lost their income to help feed their families. Above all during this difficult period of the Covid-19 pandemic lockdowns.