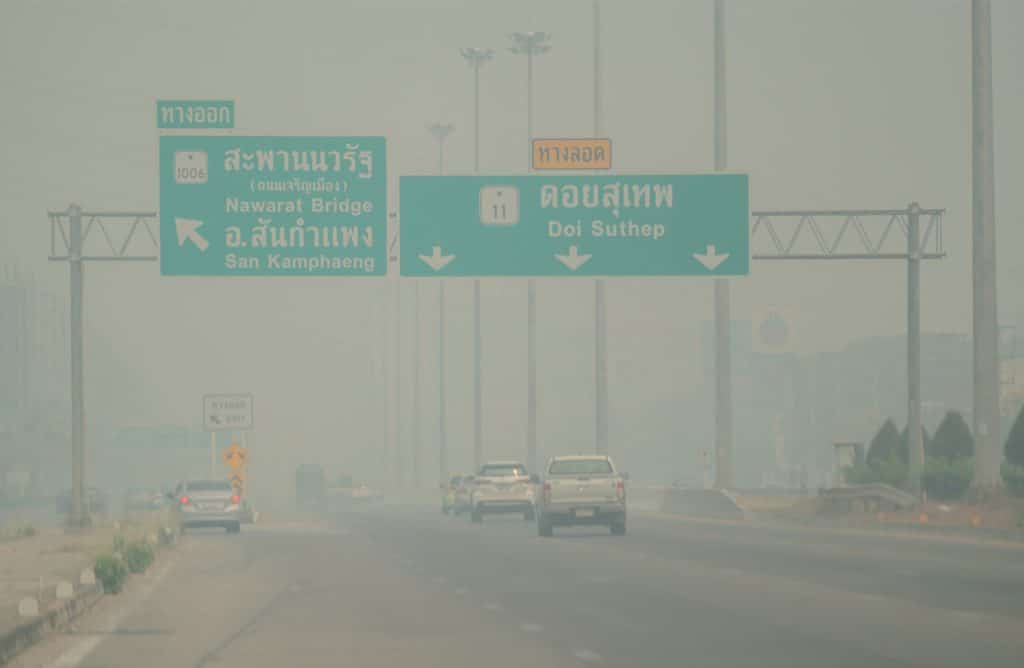 The Pollution Control Department said, on its “air4thai” website, that air quality in the two provinces is expected to deteriorate tomorrow through Friday, due to stale air.

Meanwhile, teams of firefighters supported by two helicopters fought a forest fire that started on Monday night in the hilly Samoeng district of Chiang Mai.

Hundreds of acres of mountain forest land have been damaged by the wildfire.

“There has been no forest fires in the area for many years, this caused dry leaves to accumulate into a large amount the created fuel for the wildfire. The reason the wildfire spread so quickly is that this is a bamboo forest.

It’s quite difficult to get into the hotspots because of the heavy wind and the steep terrain. He said the wildfire is expected to be controlled very soon.

In Mae Hong Son, forest fires in high mountain were have been raging for three days, scorching about 1,000 rai of forest in tambon Pha Bong in Muang district. Concerns were growing for the safety of Ban Nam Phiang Din in the area.

An initial assessment by provincial authorities has blamed a lack of “buffer zones” for the swift spread of the blaze.

Forestry officials and fire-fighting volunteers said Pai River would prevent the fire from spreading into the residential community.

In Mae Hong Son, a total of 119 hot spots from wildfires fires were reported yesterday morning, with 42 in Muang district, 20 in Pai district, 18 in Mae Sariang, 13 in Pang Ma Pha, 10 each in Khun Yuam and in Mae La Noi districts and another six in Sop Moei.

Last Friday, the Third Army Region closed down forest areas in 17 northern provinces until the end of April in an attempt to quell bushfires which have also been causing severe air pollution.