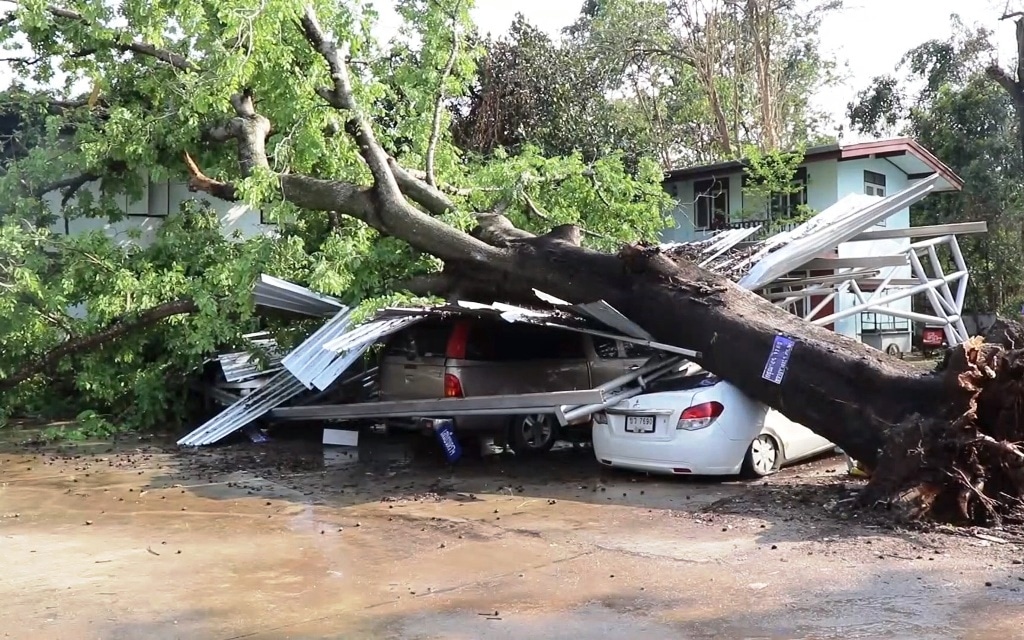 The storm moved in about 7pm and lasted for over an hour, damaging houses, a petrol station and shops. Some houses were reported to have been completely destroyed.

Trees fell on to the Phitsanulok-Nakhon Thai highway, blocking traffic at many spots. District and municipal work crews and volunteers were mobilsed to cut and move the fallen trees from the highway, allowing traffic to resume.

Nisit Sawasdithep, the district chief, ordered disaster mitigation officials to examine the damage so that assistance and relief goods could be rapidly provided for people worst affected by the storm. There were no reports of injuries in other northern Thailand provinces.. Meanwhile, a motorcyclist was killed by a falling tree Nakhon Ratchasima on Sunday, summer storms caused widespread damage in several districts of this northeastern province.

In Phimai district, a storm brought down eight power poles, partially blocking the Phimai-Chumphuang road. The provincial electricity authority turned off power to the area to allow repairs to proceed.

Many municipal election campaign billboards were blown down, and some signs and posters were carried off by the strong wind.

In tambon Tha Lat, Chum Phuang district, a motorcyclist was hit by a falling tree on a road through Khok Tong village. He suffered severe head injuries and died before a rescue unit arrived. He was Sangwan Pongpanya, 38, of Moo 17 village in tambon Tha Lat. His body was taken to Chum Phuang Hospital.

In Muang district, two motorcyclists were hit by a wind-blown election billboard while travelling along Suranarai road, outside the Zone 5 Disaster Prevention and Mitigation Office.

The billboard, for a candidate in the March 28 municipal election, was gathered up by the storm and swept through the air. The two injured men were admitted to Maharat Nakhon Ratchasima Hospital.