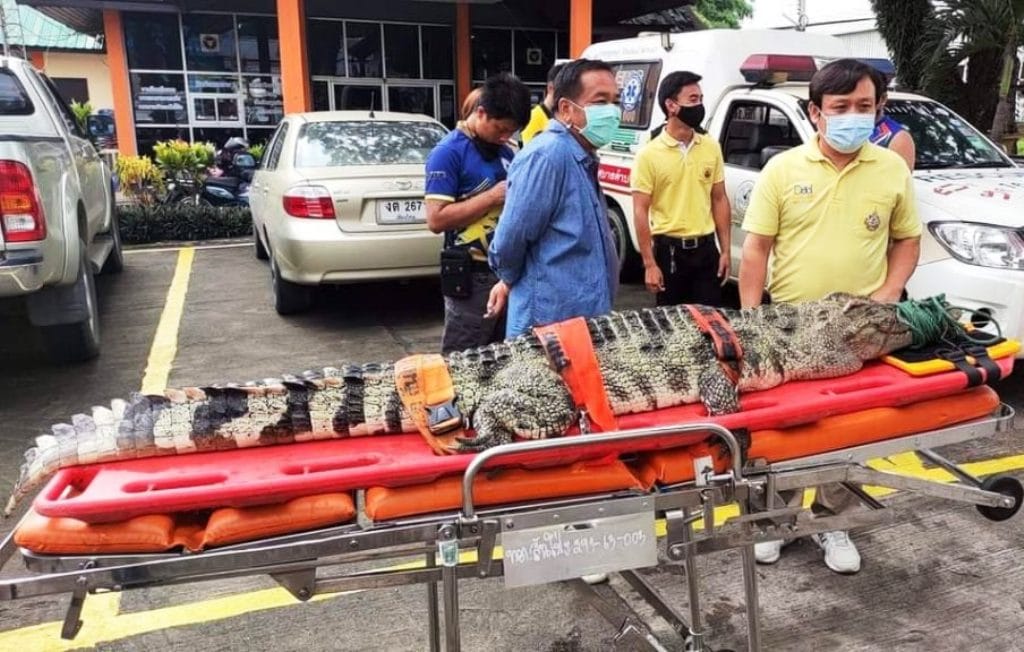 Apart from wild plants and herbs the damp dark tropical forest floor gives birth to numerous varieties of wild Chiang Mai mushroom. In Chiang Mai and Chiang Rai mushroom hunting is an obsession for many villagers.

During the rainy season when many people forage for mushrooms, some commanding very high prices in markets.

Several times during rainy season parties gather and go into the dense forested hills looking for missing mushroom hunters, who are late returning and have not made contact.

They risk their lives, and are often not home by nightfall. Despite the obvious dangers, particularly at monsoon time, the lure of wild mushroom in Thailand draws the unprepared off the beaten track.

For villagers in Chiang Mai’s San Pong sub-district of Mae Rim the hunt for mushrooms brought a completely new danger none of them expected.

While out foraging for mushrooms they came across a two meter long crocodile that was found lying in the grass.

A group of villagers said that when they came across the crocodile they didn’t know what to do and all ran away in a panic before calling rescue workers.

It is believed that this is a captive crocodile which has escaped. Authorities are contacting the department of fisheries to care for it until its owner can be found.

In other News, police in Chiang Mai Province have recovered the body a Chiang Mai University Student, who had been missing for two days was discovered in Doi Suthep-Pui National Park by a rescue team.

According to the Doi Suthep-Pui National Park rescue team, Nong Boss had been trekking with a friend in the forest when he went missing. Over 100 people have been searching for two days with hope dwindling.

The University Student’s mother visited the area earlier  to pray and conduct a small ceremony in hopes of the safe return of her son. Sadly, a mere half an hour after her prayers his body was found 500 metres away.

Nong Boss’s friend, who has tested positive for methamphetamines, told rescue workers that he and Boss went up to play in a waterfall around 8pm on Sunday night when they saw someone secretly filming them.

He went to find the person but when he returned he could no longer see Boss. Assuming he had headed back to the city, he left. It was only after he returned to town that he realized that Boss was missing.

At this point there are no signs of foul play in the University Student’s death, but police say that they will investigate.

Park authorities warn the public to beware of dangers and urges people not to risk visiting the mountains, especially since the park is now closed to the public due to the pandemic.