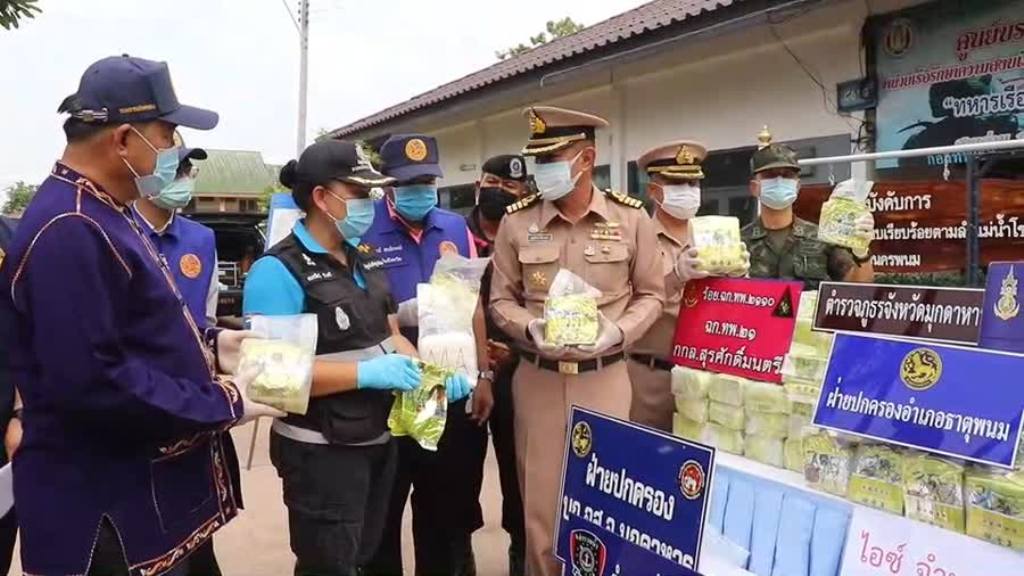 A Mekong Navy Patrol unit has seized 365 kilogram of crystal meth or “Ya ice” after a car chase late on Tuesday night. Capt Rit Natwong said at a press conference on Wednesday that the Mekong Navy patrol unit was on patrol along the road between Mukdahan and Nakhon Phanom in northeastern Thailand.

Capt Rit Natwong said Navy inelegance received a tip that a huge shipment of drugs would be smuggled across the Mekong river from Laos.

At Ban Don Sawan in That Phanom district, the Navy patrol signaled the Chevrolet SUV to stop, however the driver sped away, prompting officers to give chase and open fire at the SUV’s rear tires.

Capt Rit Natwong said the car veered off the road and ended up ramming into a tree. The driver fled under the cover of darkness.

Last week two Laotian men have been arrested and 550 kilograms of crystal meth has been seized on the bank of the Mekong River in northeastern Thailand. Police estimate the sized drugs were worth approximately $US 800,768.00.

Both Laotian men were detained on the bank of the Mekong River in Sakon Nakhon Province on Wednesday night. They were apprehended as they were loading crystal meth into the back of a pickup truck, police said.

They said that Sakon Nakhon drug suppression police arrested Surawit Champachai, 27, of Bueng Kan province, at a resort in Sakon Nakhon’s  Bang Muang district on Tuesday. He had in his possession 30,115 methamphetamine pills.

Further investigation revealed another Thai man was involved in the smuggling of the drugs. They arrested Charoon Suriyaphum, 46, of Sakon Nakhon’s Wanon Niwat district, with 3kg of crystal methamphetamine in his pickup truck.