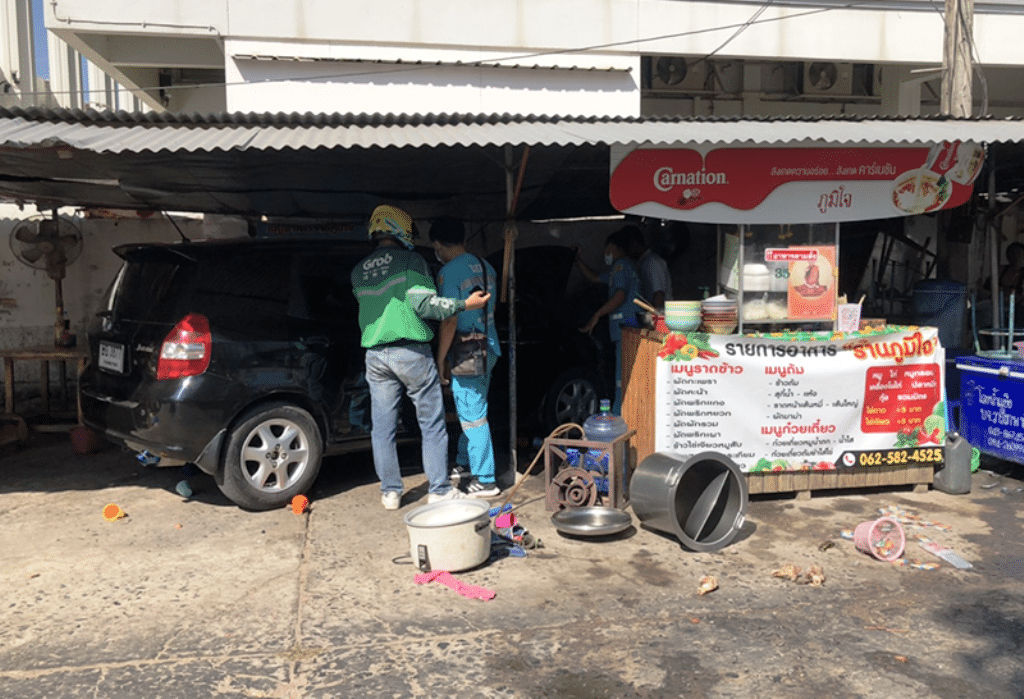 Police in northeaster Thailand have charged a man with attempted murder after he drove his car into a roadside restaurant. The intentionally drove his Honda Jazz into the restaurant severely injuring both owners.

Kalasin City Police Station received notification that a Honda Jazz drove into a restaurant and many were injured and smoke was coming out of the car. Police then notified the local rescue team and the fire station.

When officials arrived at the “Poomjai” restaurant it was surrounded by local villagers, some were still in shock. Inside was a black Honda Jazz with smoke coming out of the engine. Rescue officials quickly removed the cars gas tank to prevent a possible explosion.

KaLasin city police reported three people were injured in the incident, the 2 owners were critically injured and a customer received minor injuries.

Pongpat Nanthapang 25-year-old and Yupa Iman 27-year-old husband and wife were hit by the vehicle. The customer was dining inside the restaurant but luckily received only minor injuries from the crash. The three injured victims were immediately transported to a local hospital.

Upon interviewing witnesses to the accident, villages said the driver intentionally drove into the restaurant wanting to kill both owners.

They said the man intentionally rammed his car into the restaurant hitting the owners, he then left the car, kicked a few items, and ran away. He returned shortly after and threatened to kill the owners.

Some good citizens helped secure the man until officials arrived. The man admitted to driving into the restaurant but denied threatening to kill the owners.

Villagers inside the restaurant ran for their lives when the incident took place. Ms Wanida 55 the mother of the driver who owns a glasses shop nearby the restaurant stated her son was on medications and was acting normal.

Her son and Mr Pongpat had an argument about a year ago and her son hit Pongpat in the head with a metal pole. She believes her son forgot to take his morning medication before committing the crime.

The driver was identified as Mr Chaowat Puengcharoen 25. Kalasin police said the man did not make much sense when they interviewed him, he was taken to the police station to be tested for drugs.

Hundreds of Elderly Scammed by Teachers in Northeastern Thailand