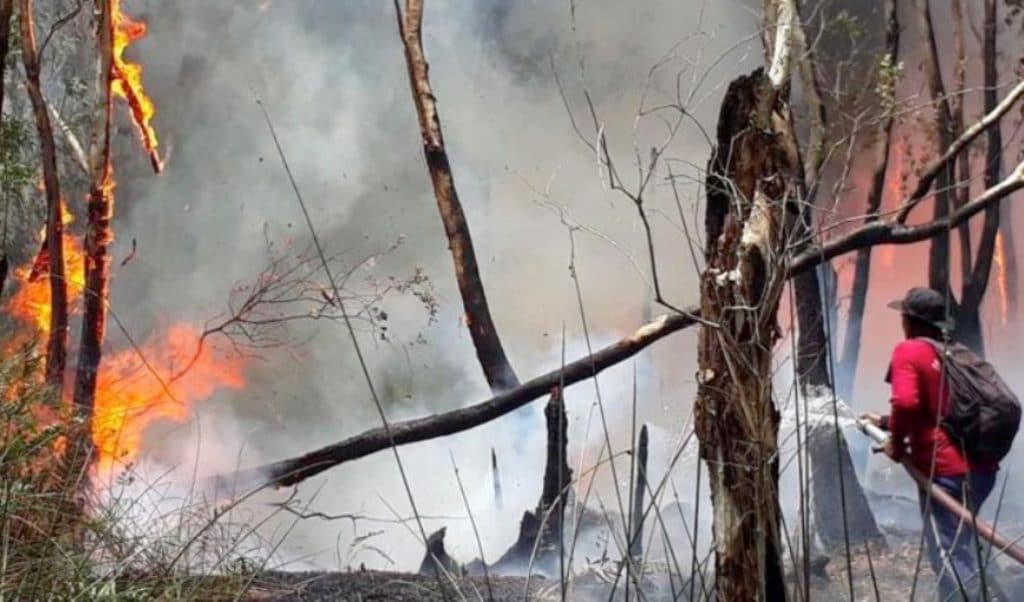 Soldiers, firefighters and volunteers are struggling to put out brush fires along the Suthep-Pui National Park in northern Thailand’s Chiang Mai Province.

A KA-32 helicopter has been brought in to help contain the fires along the Suthep-Pui National Park following fires  eruptin south of the park yesterday afternoon.

The fast-spreading fire in the bamboo laden forest has been a challenge to control and more firefighters and  volunteers are being sought. Soldiers from the 3rd Army as well as firefighters and volunteers have been battling the fire’s spread into nearby communities.

The KA-32 helicopter has already managed to put out about 50% of the fire, say authorities. It is expected that the fire will be soon extinguished. So far 200 people have volunteered to help in this effort.

One man has been detained under suspicion of setting or causing the fire, though he is currently denying all allegations. AQI readings of above 100 are considered unhealthy, while levels above 200 are regarded as very unhealthy. Readings in excess of 300 are usually considered hazardous.

Data from IQAir, a technology partner of the United Nations Environmental Program also indicated that Chiang Mai city was among the world’s top three most polluted cities on yesterday afternoon.

More than 1,400 hotspots were detected in the northern region on Wednesday morning by Thailand’s Geo-Informatics and Space Technology Development Agency or GISTDA – a considerable increase from 352 on Mar 1st.

Despite high AQI readings in northern Thailand, Chiang Rai reported much fewer hotspots compared to nearby provinces. Data from GITSDA showed it has 11 hotspots on Wednesday. In comparison, there were 510 hotspots in Mae Hong Son, 311 in Tak and 295 in Chiang Mai. Sombat Boonngamanong, who leads the volunteer firefighters in Chiang Rai, said the situation is currently under control because local units work systematically together.

Each morning, hotspots are located using satellite imagery and a drone with a thermal imaging camera is deployed to study the size of the fires.

“Then we evaluate how difficult it would be to access which area, for example, how far our vehicles can go in and how steep the terrain is.” Sombat said.

The volunteers are then split into groups with different responsibilities and access the target areas with firefighters from the Royal Forest Department. According to Sombat, extinguishing the fires is not hard. The challenging part is the walk on rough terrain.

“Ninety per cent of our energy is spent on travelling by foot and carrying equipment and water to the hotspots in order to put out the fires,” he said.

“It’s very tough and that’s why we need many volunteers. There are only a few firefighters but a lot of people who provide support for them.”

Three Dead after Dramatic Showdown with Police in Northern Thailand