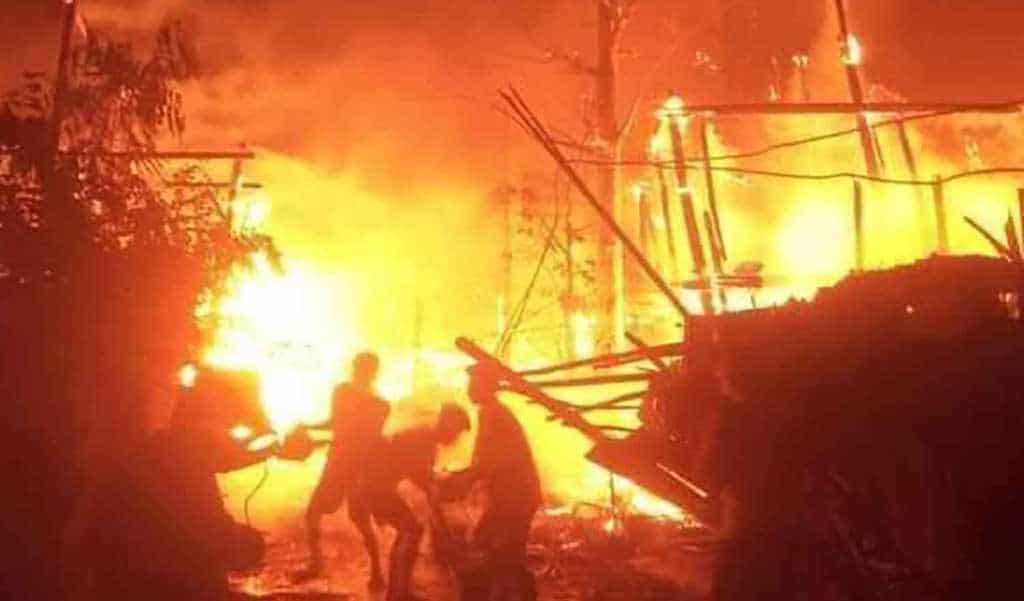 A fire destroyed at least 100 houses after it raged through Thailand’s largest refugee camp for Karen refugees, northern Thailand’s Tak Province. The fire happened on Tuesday night there were no reports of casualties.

The district office said the fire at Ban Ma Lae started in a thatched shack in the middle of the camp and spread very quickly to other houses.

The refugees tried to put out the fire, forming lines to fetch buckets of water, as they made phone calls to the Tha Song Yang district office for help. Two fire engines were dispatched to the camp.

More than 100 thatched houses were reported to have already burned down by the time the fire crews arrived.

They fought the blaze late into the night. The full extent of the damage was stil being assessed. There are about 39,000 Karen at Ban Mae La, the largest refugee camp in Thailand.

Thailand has hosted refugees fleeing fighting in Myanmar for more than three decades. According to the United Nations High Commissioner for Refugees, there are nine main camps, with about 91,000 refugees, along the border with Myanmar.

Meanwhile, suspected migrant traffickers were arrested in Tak as they brought in five Chinese nationals from Myanmar’s Myawaddy town.

Col Natthakorn Ruantib, deputy chief of staff of Naresuan Task Force, was leading police officers and soldiers during a patrol in Mae Ramat district yesterday when they found five Chinese nationals brought in by Phakoe Natheesaithan, deputy village head in the district, and three other men.

The media said the task force found suspicious vehicles on the edge of a forest behind a village and saw that two pickup trucks had no license plates. All the suspects were taken to be tested for Covid-19 at a hospital.

When faced with a checkpoint, the suspects planned to make the Chinese nationals walk to avoid inspection, according to the investigation.

Investigators said the Chinese nationals previously worked with an online gambling host in Myawaddy town before they were smuggled by the suspects, noting the group was heading to their next destination, Chiang Mai.