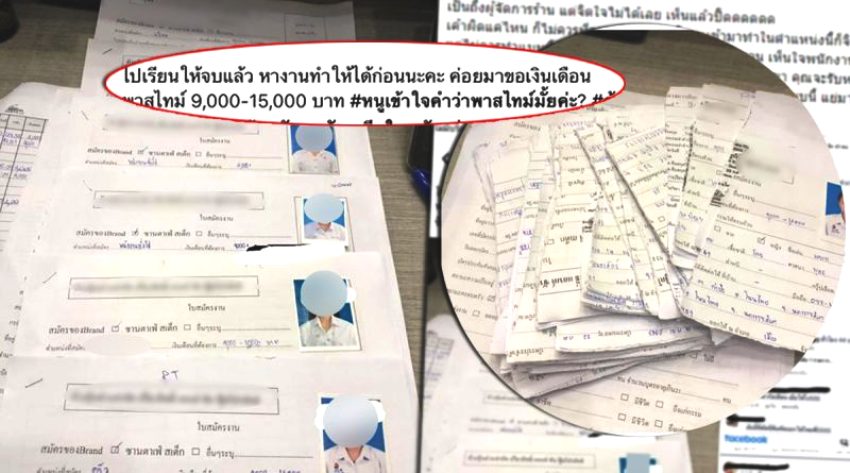 A Facebook post of a restaurant manager has been slammed by netizens after she posted torn up job applications from students. The student had stated that they wanted to earn more than 10,000 THB per month for a part-time position.

The manager took her anger for the applicants even further when she posted the torn papers on Facebook marketplace. Saying “Go back to school and graduate before asking 9,000 – 15,000 THB per month for a part-time job. Do you understand the definition of part-time?

If they handed the applications directly to me I would tear it up in front of them and give them hell”.

Netizens quickly commented that even for a part-time job a person should earn more than 10K per month. Because the average cost of living is often more than the minimum wage of 300 THB per day.

What the manager has done is not right and is discrimination against people looking for a way to earn a living. The restaurant manager claiming that she would’ve given them hell is pushing it too far.

The manager also stated that when you’re working a part-time job you are being paid by the hour. Furthermore there is no way that someone would earn more than 9,000 THB per month.

Many netizens disagreed and state that many companies now offer 10K for part-time work on Facebook Marketplace. Saying it may go by hourly but with added benefits and tips an employee will receive more based on real experience.

The manager claims that someone who earns more than 10K requires real skills and a long time of experience. What do you think about the manager’s actions? And how much should a part-time worker earn per month?

Northern Thailand Gagging Under a Blanket of Toxic Haze