Man Captured on CCTV Contaminating a Elevator with Sweat and Saliva

Thai City of Lopburi Overrun by Hundreds of Hungry Monkeys 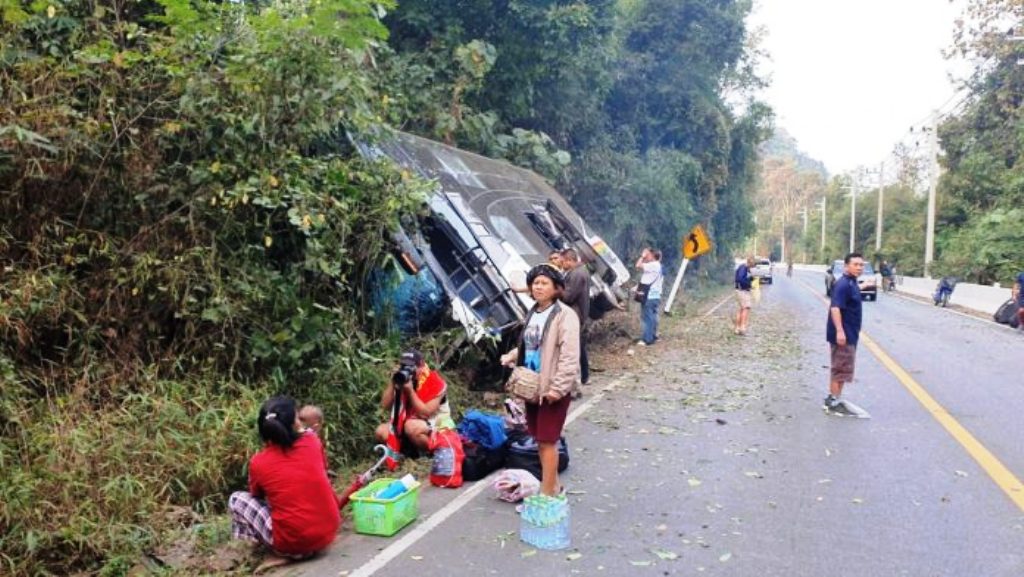 A tour bus has crashed in northern Thailand’s Nan Province injuring eight people were hurt, one seriously. The tour bus skidded into a mountain slope at a curve in Muang district of Nan on Saturday.

The accident occurred late Saturday morning, said Charasphan Arunwong, head of the provincial disaster prevention and mitigation office.  According to Thai media the bus was found lying on its side when police and rescue workers arrived at the scene.

Driver Yutthapong Yangklang, 32, was badly injured while 7 passengers sustained minor injuries. All were given first aid before being taken to Nan Hospital.

A police said the tour bus was using GPS to navigate, however, the system guided the bus to Ban Luang district.

The driver turned around to head for Muang district, which would lead him to Pua district.

While travelling alongside a mountainous slope, the bus suddenly developed brake failure at a sharp curve. The driver swerved right to stop the bus, which hit the slope.

Police have advised visitors wanting to travel to Nan to ask for directions from local residents. Even more consult relevant agencies about routes if they are unfamiliar with the area.

Six months ago 2 people were seriously injured when a bus carrying 40 passengers lost control and crashed into a roadside tree in Northern Thailand’s Lampang province.

The accident took place a little past midnight, the two injured people were sent to a local hospital. Most of those who escaped unharmed could not tell police how the bus crash had happened as they were asleep.

Police suspected the bus crash was either caused by the bus skidding on the slippery road or the driver falling asleep at the wheel.

News reports appear several times a month of bus crashes in Thailand. Buses driving off roads or falling into ditches, or hitting or rear-ending other vehicles.  In many cases, bus drivers in Thailand are not properly trained.

They also drive far too fast, especially in poor road conditions. Even more they will sometimes even overtake slower moving vehicles on dangerous stretches of roads.

Traveling long-distances by a passenger bus in Thailand at night can be particularly dangerous. That’s because the drivers are sometimes too tired to drive long stretches and do occasionally fall asleep.

Video from Accident Scene of Bus Crash in Northern Thailand