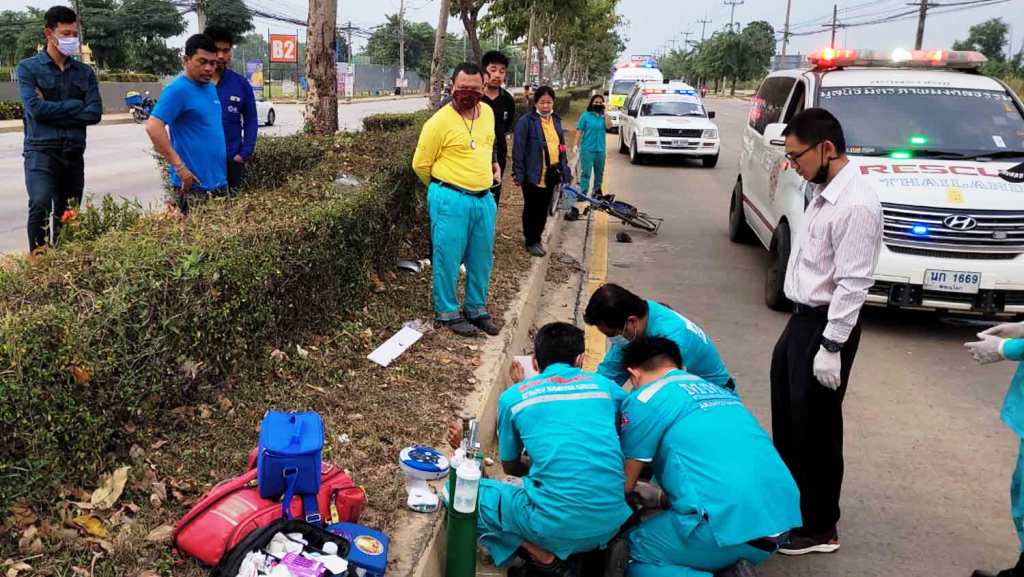 An elderly man riding a bicycle has been killed in northern Thailand when he was hit from behind by a Honda CRV driven by a doctor.  The doctor on his way to  Bangkok Phitsanulok Hospital on Tuesday morning.

The accident occurred about 8am near a petrol station, Pol Capt Noppadol Mai-ngam, a duty officer, said.

Rianchai Malad, 80, was riding his bicycle in the far right lane when he was hit from behind by a Honda CRV driven by Dr Withaya Pichetvirachai, 35, a doctor at Bangkok Phitsanulok Hospital.

Police said the doctor tried to help him, and rescuers called to the scene performed CPR on the man. They could not save his life. Dr Withaya accepted responsibility for the accident, telling police he did not see the man.

He said had not expected someone on a bicycle to be in the far right lane.

Phitsanulok police also reported a driver of a pickup truck was killed when his truck ran off the road and hit a tree while overtaking another vehicle at high speed. The crash occurred about 8.20pm in front of the main gate of Pibulsongkram Rajabhat University.

Recordings from the dashboard and rear cameras of another car on the ring road showed the pickup overtook it at high speed. He then ran off the road and into the tree, police said.

The driver, Manit Pornsawat, 49, was thrown out of the vehicle and killed. The front of the pickup was completely destroyed. Manit’s body was taken to Naresuan University Hospital for postmortem examination.

A police captain was found dead in the backseat of his parked pickup on a road in northern Thailand on Sunday afternoon. The two-door Isuzu D-max was parked on the road shoulder near Huay Fong village in tambon Wang Nok Aen, on the Phitsanulok-Lom Sak highway.

The body was also sent to Buddhachinaraj Hospital in Muang district for forensic examination to establish the cause of death.