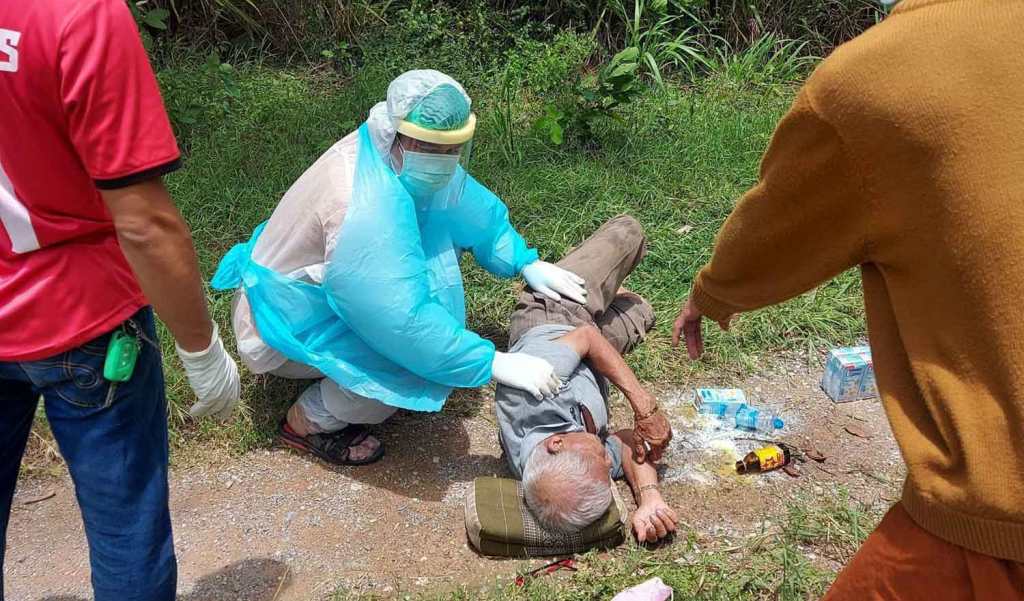 Police have reported a daughter has abandoned her 80-year-old father at a temple in northeastern Thailand then just drove away with her partner. The elderly man was later confirmed to be infected with Covid-19.

A Facebook user said to be a medical worker at Bua Yai Hospital posted pictures of an old man lying on a trail near Wat Pa Suan Thamma Sawaddee in Ban Nong Waeng village of Bua Lai district of Nakhon Ratchasima, on Monday.

The pictures were accompanied by written condemnation of a daughter’s abandonment of her elderly father.

Luang Phor Sitthichai, abbot of Wat Pa Suan Thamma Sawaddee, told police that a daugter and her partner brought the 80-year-old man to the temple on Sunday. They said that her father lived in Khon Khaen province and wanted to stay with him at the temple with his friend.

Then the daughter and her partner left the old man with his cloth bag at the temple, and quickly drove away.

Ban Nong Waeng village head Thongsuk Thaebtham learned from the old man that his daughter had brought him from Lop Buri province and left him at the temple.

On Tuesday morning the old man wandered away from the temple and was later found lying in the rain on a nearby trail. Local health workers took him for a Covid-19 test, which returned positive.

The man was taken to a hospital in Khon Kaen province because he was a native of Khon Kaen.

Monks at the temple, health workers and rescuers who were in close contact with the old man were placed in 14-day quarantine. Police said the daughter should not have treated her father that way, and had put others at risk of catching covid-19.

Meanwhile, two young dusghters aged 7 and 11 whose mother died on Monday, leaving them orphaned and alone, are now being cared for by the provincial social development and human security office.

Their 44-year-old mother Apaporn Suntarachon was dead on the floor beside their mattress-bed  when the girls woke up in their rented room on Monday morning in tambon Tha Chalong, Bang Phli district.

The mother had been ill – coughing blood, vomiting and with trouble breathing – for the previous few days, but it has not been confirmed yet whether she died from Covid-19.

With the death of their mother and sole supporter, the girls were left alone in the world.

Supacha Promsorn, chief of the Samut Prakan child and family welfare home, said the two would be quarantined and undergo treatment. They would also be tested again to confirm whether they were infected with the virus.

After that her office would search for any relatives who would  be willing to take them into  their care, if the children agree to be under their guardianship.

If no relatives could be found, the provincial social development and human security office would take care of them, Ms Supacha said.