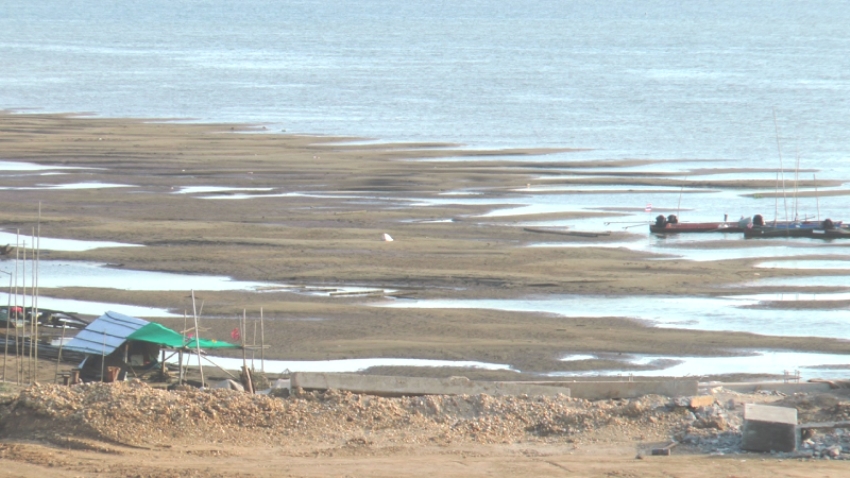 The Mekong River in northeastern Thailand is currently about one meter deep as it flows through Nakhon Phanom province in Thailand. Environmentalist and activist say the water levels are a posing a threat of severe drought during this dry season.

Officials said the river level is dropping faster than in recent years due to the construction of dams in neighbouring Laos and low rainfall in catchment areas.

Water levels in three main tributaries; the Nam Kam; Nam Songkhram; and Nam Un rivers are now at 10%-20% of their capacities. This will cause huge shortages of water for agriculture for the lower Mekong communities.

Officials said underground water is also running dry. Because of this, irrigation officials have stopped releasing water from Nong Han lake in Sakon Nakhon province into the Mekong river via the Nam Kam stream. Above all to keep enough water to irrigate about 60,000 Rai of farmland during the dry season.

Farmers have been told to grow crops outside irrigated zones and look for new sources of water to cope with the drought.

China’s water relations with Thailand and the other lower Mekong countries are once again under strain after Beijing held up the Mekong River’s flow at one of its large dams upstream, precipitating a sudden drop in volume for downstream countries that share the region’s longest body of water.

“The water levels dropped suddenly since the beginning of January,” fumed Niwat Roikaew, chairperson of Love Chiang Khong Group, a nonprofit environmental campaign in Chiang Rai, a northern Thai province where the Mekong flows past. “We all know this happened because China closed the dam.”

An estimated 60 million people along the lower Mekong depend on the river’s flow for their livelihood. Communities in Thailand, Cambodia, Laos and Vietnam were caught off guard by Beijing’s move, worsening their plight in the midst of the annual dry season.

By mid-February there was little relief in river basin communities affected by China’s decision to reduce the discharge from Jinghong Dam in Yunnan Province. China’s Ministry of Water Resources informed the lower Mekong countries of its tests at the mega-dam in early January, almost a week after it began to slash the flow to 1,000 cu. meters per second from the usual 1,900 cu. meters. The tests were to have been completed by Jan. 24.

The fluctuating river flow has fallen to “worrying levels,” the Mekong River Commission said in a report this month. The intergovernmental body — representing Cambodia, Laos, Thailand and Vietnam — manages the Mekong basin’s ecology.

“There have been sudden rises and falls in water levels immediately downstream of Jinghong and further down to Vientiane [the Laotian capital], which has been challenging for authorities and communities to prepare for and respond to possible impacts,” an MRC official said in the report.