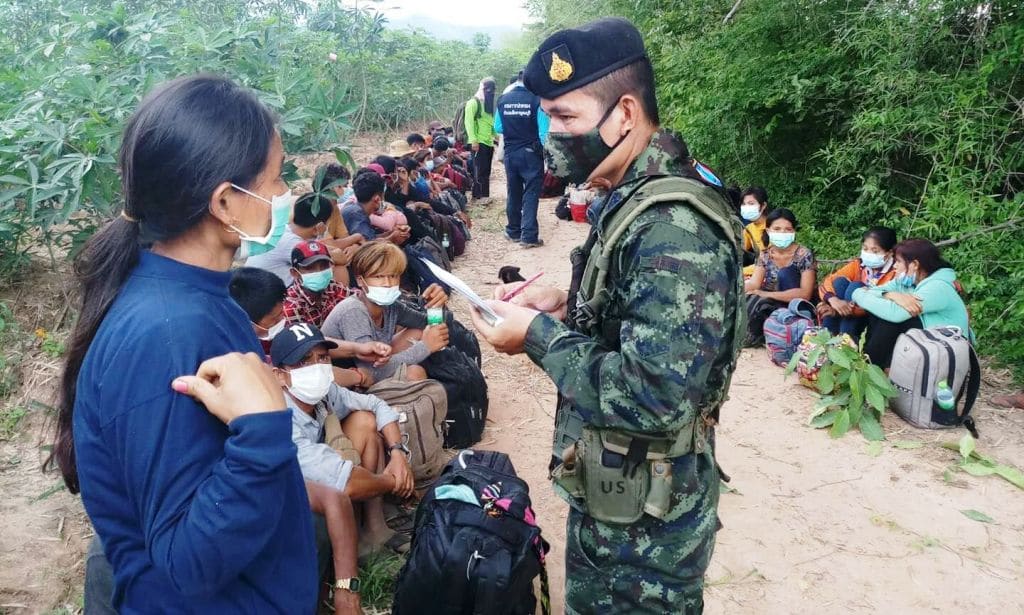 Border security officials in Thailand are struggling to address growing fears that covid-19 cases are entering from neighbouring countries. Border officials are scrambling to contain illegal migrants from crossing into Thailand that may be infected with Covid-19.

The Death rates from the UK variant of the virus have jumped to double digit numbers since the outbreak started in early April.

The biggest fears center on the border with Myanmar in Kanchanaburi province in northeaster Thailand. There has been an ongoing influx of illegal border crossings, but the fears also extends to the other land borders.

Apisamai Srirangson, a spokeswoman for the Centre for Covid-19 Situation Administration, said on Monday that border authorities are intensifying border checks with Malaysia, Myanmar, Cambodia and Laos.

Along the 370 kilometer Thai-_Myanmar border in Kanchanaburi Province. Nearly 300 people from Myanmar were caught illegally crossing into Thailand last week. Covid-19 remains unchecked in Myanmar especially due to unrest related to the February military coup that has killed over 700 people.

An army Task Force based in Kanchanburi and Interior Ministry officials report that while many Burmese have been fleeing the political crisis in their home country, the ease of getting work in factories in Samut Sakhon, Ratchaburi, Nakhon Pathom and Chon Buri enticed many others to gamble illegal entry into Thailand.

Task Force commander Maj Gen Banyong Thongnuam said 40 illegal migrants captured on Sunday had come from as far as Yangon, walking for about a week to reach the Thai border.

Maj Gen Banyong and other authorities reported the illegal job seekers followed the same pattern as other groups. Recruiters in Myanmar delivered them to an area near Kanchanburi. They were then led across the border by guides to meet Thai agents who would deliver them to factory jobs.

A Myanmar migrant who  identified himself only as Bao said after he and 37 others had been apprehended on Friday that each had to pay the delivery man 15,000 baht when they reached their destinations.

Kanchanaburi governor Jirakiat Phumsawad held a meeting on Saturday, calling for urgent action to end the influx. He said Thailand was already battered enough by the latest surge of the coronavirus virus.

Myanmar has reported more than 140,000 confirmed cases and more than 3,000 deaths since the pandemic began last year.

First case of the covid-19 variant from India

On the southern border, Malaysia has reported detecting new coronavirus variants first identified in South Africa and India and regarded as highly contagious.

Songkhla governor Jaruwat Kliengklao said on Monday a recent meeting with the 4th Army  Region leadership had agreed to deploy soldiers, police, district officials and volunteers along the entire border with Malaysia.

Malaysia said on Sunday it had detected its first case of the variant from India, while the New Straits Times reported on Monday that Kalantan state, which connects with Narathiwat, had found 10 cases of the South African variant on Sunday.

Col Ayuphan Kannasutra, the commander of a task force in Songkhla, said patrols would operate around the clock. Authorities were concerned that some Thais could illegally cross back over the border from Malaysia to visit their families as Ramadan comes to an end.

Most Thai returnees pass through the checkpoint in Sadao district of Songkhla, which allows them to cross three days a week – Monday, Wednesday and Friday.

Cambodia’s Banteay Meanchey province also reported a record number of Covid-19 cases on Monday, the Khmer Times reported, citing the sub-committee for Covid-19 tracing without giving the figures. So far the province, which borders Sa Kaeo, has detected 412 cases.

A Thai man returning from Cambodia on April 22 tested positive on Saturday, the CCSA said on Monday.  “We are determining the variant of the virus,” Dr Apisamai said. The patient is at a hospital in Sa Kaeo.

Although Thailand had only one imported case on Monday, the country reported 31 deaths, a new daily high, and 2,041 new cases.

In Laos, Bokeo province, opposite Chiang Rai province, on Sunday recorded 60 new covid-19 cases, a new record for the province, 57 of them in Tonphueng district, the Vientiane Times reported.