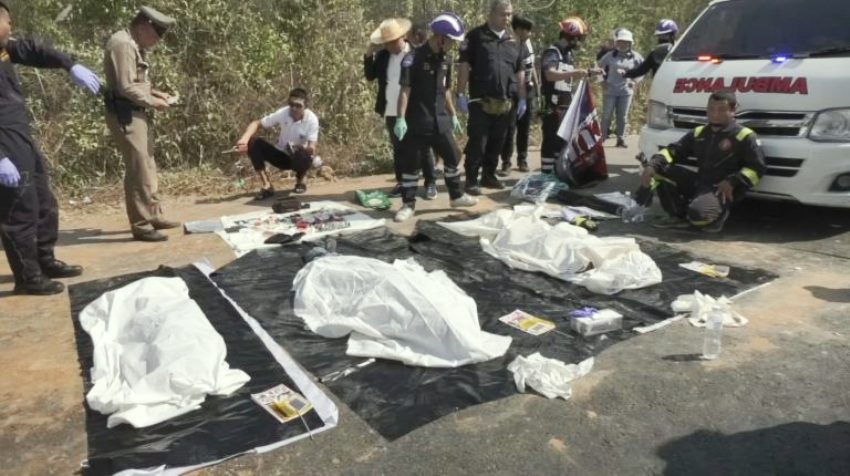 A couple and their grandson have been killed in a three vehicle collision in northeastern Thailand on Sunday.The accident occurred at about 10am on the Khon Kaen-Phra Yuen road in Khon Kaen.

Suriya Thongla, 40, the driver of a pickup, told police that his vehicle laden with papayas was leaving Khon Kaen town when a Suzuki Ciaz tried to overtake it from the left. The road narrowed at that point, and the car crashed into the left side of his pickup. It then spun around, veered across the median and collided with an oncoming truck loaded with dirt.

The violent collision killed the driver, Art Wichamoon, 50, and his wife Somkid. The crash also killed their 2 year-old grandson, who was sitting on his grandmother’s lap, Thai media reported.

The driver of the lorry, who was not identified, he was also slightly injured in the Collision.

Police, said they had questioned the drivers of the pickup and the lorry. Forensic police were called to examine the three vehicles to establish the cause of the collision. Forensic police believe excessive speed also played a significant role in the tragic collision.

Road accidents kill 22,000 people per year in Thailand, averaging out to 65 deaths a day.The proportion of road collisions caused by drunk driving clocked in at 36.6 percent. Followed by speeding at 28.3 percent.

Chiang Mai Man Claims He Was Attacked and Robbed by Foreigners