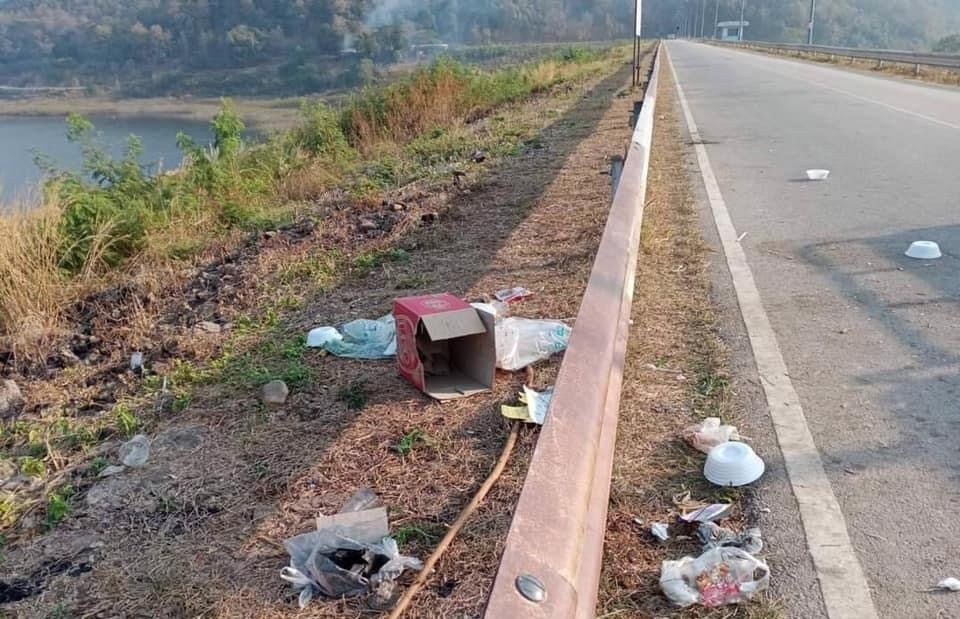 Following the sharing on social media of photographs of garbage left by litterbugs a the rim of the Mae Kuang Dam in Chiang Mai, authorities warn that if this littering behaviour continues they may be forced to close the dam to tourism.

The Mae Kuang Dam area in Chiang Mai has been a popular spot this winter for locals and Thai tourists from near and far to camp, have picnics and parties as well as simply stop by for some quiet time. Unfortunately many visitors are litterbugs and this is a warning to all visitors that if this continues the dam will be closed to visitors.

Human carelessness or perhaps ironically a lack of care for the environment also meant that these visitors brought with them rubbish — and lots of it — in the form of plastic, styrofoam, glass, metal and more.

It is known that it takes a single piece of plastic 20 years to biodegrade and a styrofoam container requires a millennium. When left to the elements, some of this rubbish is eventually consumed by wildlife, to deadly effect. Litter is also detrimental for the environment as it not only destroys its aesthetic beauty but also poses a fire hazard.

Plastic waste is clearly still piling up but hopefully that will no longer be the case if Environment Minister Varawut Silpa-archa gets his way.

He announced via Facebook that Khao Yai National Park, the nation’s oldest, would return rubbish to its respective owners through the post. He went on to warn that future offenders would be registered with the local police and possibly face five years in prison and/or a fine of 500,000 baht.

Over the years, the DNP has asked for the cooperation of visitors to not litter and/or to dispose of their rubbish at pre-determined locations, going as far as distributing disposable bags upon entrance.

Yet such measures have largely failed to hit the mark.