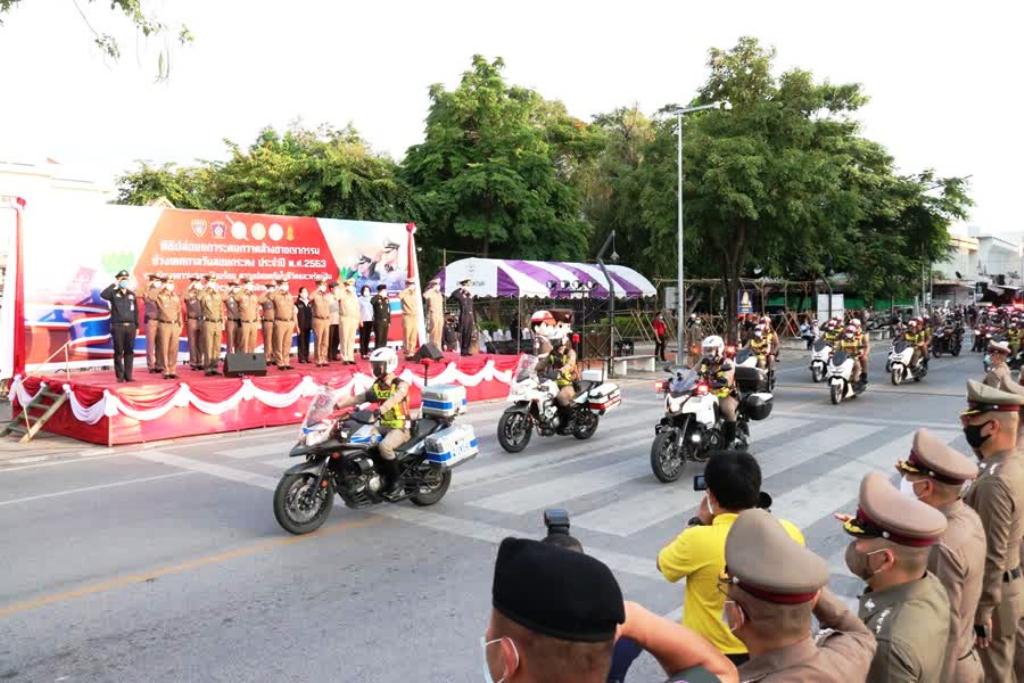 Authorities in many northern Thailand have stepped-up anti-crime operations ahead of the annual Loy Krathong festival. Stepping up their crackdown on criminal activities, while keeping a close watch on the use of fireworks and also firecrackers.

In Chiang Mai province, the Assistant Commissioner-General of the Royal Thai Police, Pol. Lt. Gen. Chinnapat Sarasin, presided over the launch of the anti-crime operation ahead of Loy Krathong. The event was attended by the Governor of Chiang Mai, Charoenrit Sa-nguansat, heads of state agencies, administrative, police and military officers and also volunteers.

Loy Krathong in northern Thailand is often celebrated together with Yee Peng, a Lanna festival. This year, the festival will be celebrated on October 31, and many residents and tourists are expect to release floating baskets and launch lanterns in different areas. Relevant agencies have made preparations to deal with traffic congestion and the use of fireworks, firecrackers and lanterns, while protecting members of the public and tourists from theft and also other crimes.

The Governor of Chiang Rai, Prajon Prachsakul, presided over the launch of another anti-crime operation, taking place in all 18 districts of the province. The operation is being jointly conducted by 300 personnel from the 37th Military Circle; the Third Cavalry Division; the Phamuang Force; the Border Patrol Police; the Immigration Police; the Tourist Police; the Highway Police; the Chiang Rai Disaster Mitigation and Prevention Office; the administrative sector; the Norasingh team; and also Chiang Rai Prachanukroh Hospital.

An anti-crime operation was also launched in the northern province of Lamphun. The Governor of Lamphun, Worayut Naowarat, presided over the event. Security officers are to patrol different venues at night, to ensure the safety of people and tourists. On October 31, Phra That Hariphunchai Temple, in Lamphun, will also organize the 100,000 Lanterns festival. Officers will also be deployed to address traffic and safety issues in different areas and to take other precautionary measures.- NNT

Although not an official public holiday, Loy Kratong is one of the most popular and romantic of Thailand’s traditional festivals. The festival is held on the night of the 12th full moon, which lands sometime in November. The festival is held to pay homage to the goddess of rivers and waterways, Mae Nam my take on a new meaning in Flooded parts of Thailand

Loy literally translates to “float”, while Kratong is the Thai word for a sort of tray made out of banana leaves. Loy Kratong is celebrated by floating elaborate kratongs decorated with flowers, candles and incense. There released on just about any waterway in the kingdom.

The romance is provided by a legend about the origins of the festival in 13th century Sukhothai. According to the story, Nang Nopamas, a royal consort of King Ramkhamhaeng (the founder of Sukhothai), made the first kratong as an offering to Mae Nam.

She set it afloat on one of the canals of the palace so that it would drift past her lover the king. The king was delighted with the creation.And thus was the origins of the saying that if two lovers set a kratong adrift. It stays afloat until out of sight, their love will last forever.