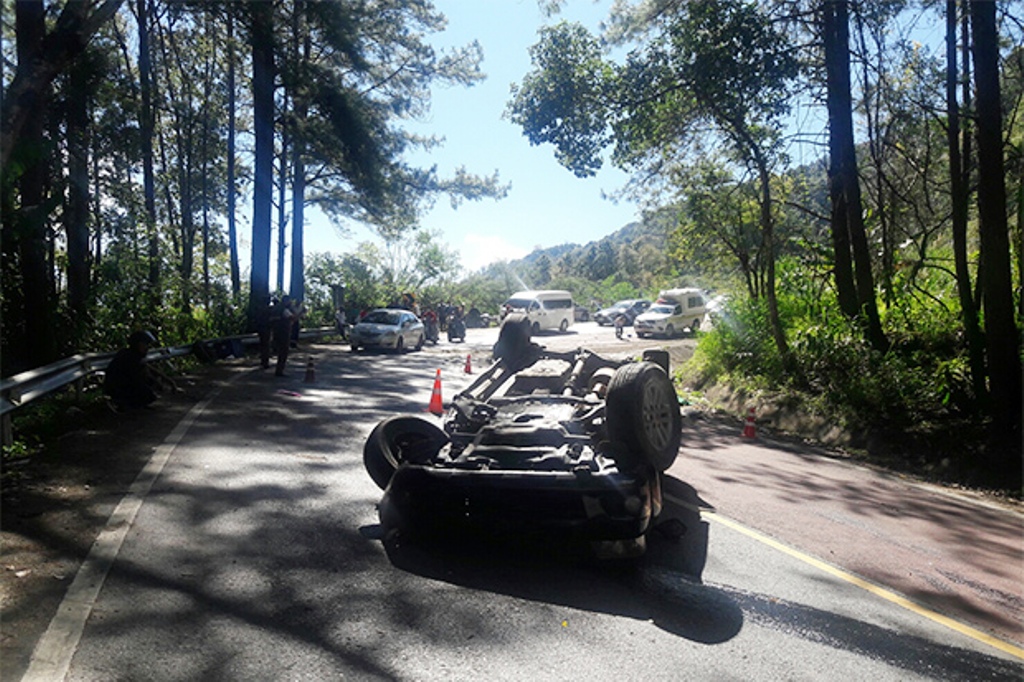 Five people have been killed their pickup truck overturned while it was taking a sharp curve on the road down from Doi Inthanon in Chiang Mai on Friday.

Chiang Mai police said the Highways Department vehicle lost control while it was descending from the top of the country’s highest mountain and entering the curve.

All of the passengers in the cabin and those riding on the bed were thrown out to the road and five of them died, the police said.

It was not known how many people in all were in the vehicle and whether they were officials or tourists visiting the mountain during the long weekend.

Meanwhile, Chiang Mai Authorities at Doi Inthanon Thailand’s highest peak say its is seeing upwards of 5,000 visitors per day, as temperatures drop, raising concerns about waste management and overseeing the safety of all visitors during peak season.

However, Doi Inthanon park authorities in Chiang Mai said that in the morning there were no signs of excess waste, and that visitors appeared to be depositing their waste in the appropriate bins.

Out of all the visitors, 99% are Thais, with only 26 foreign nationals registered as visiting yesterday. A total of 1,205 vehicles passed through the park gates and many more are expected this coming weekend.

Doi Inthanon is one of the most popular national parks in Thailand. It is famous for its waterfalls, few trails, remote villages, viewpoints, sunrise/sunset watching, birdwatching and the all year round cold weather on higher elevations. The main park entrance is about 70 km southwest from Chiang Mai city center.

Also known as “The Roof of Thailand”, Doi Inthanon National Park covers an area of 482 km² in Chiang Mai province north of Thailand. The park is part of the Himalayan mountain range with elevations ranging between 800 and 2,565 meters asl. The highest peak at Doi Inthanon Mountain which is the highest mountain in Thailand. The park has high humidity and cold weather all year round.

The park is named in honour of the king Inthawichayanon, one of the last kings of Chiang Mai, who was concerned about the forests in the north of Thailand and wanted to preserve it. After his death his remains were placed in the park as he ordered and the forest was renamed to Doi Inthanon.

The rainy season is May to October with most rainfall around July to September. The rest of the year is quite dry with colder weather around November to February.