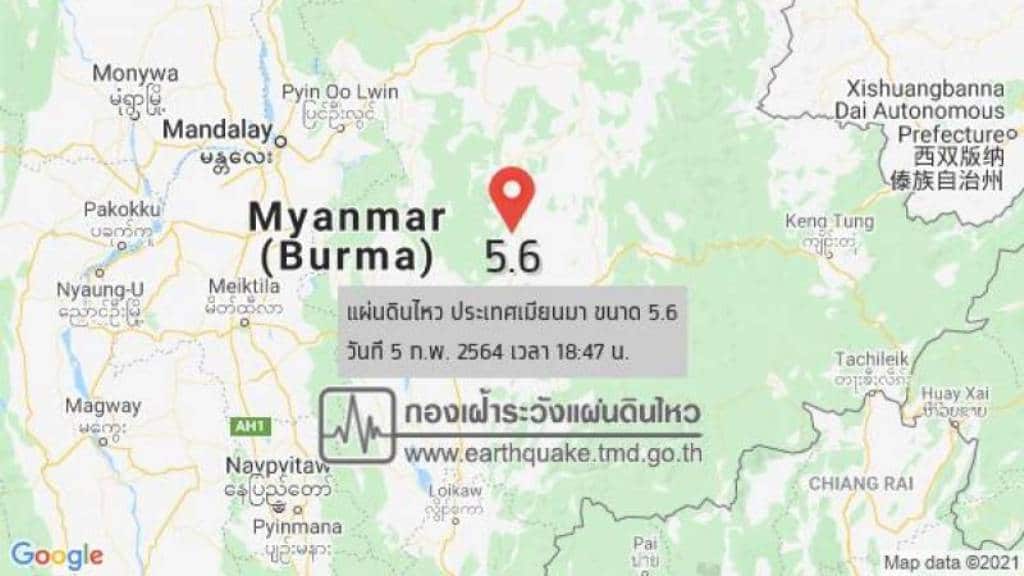 The quake hit at a shallow depth of 10 km beneath the epicenter near Taunggyi, Shan State, Myanmar (Burma), on the afternoon on Friday 5 February 2021 at 5:47 pm local time.

Shallow earthquakes are felt more strongly than deeper ones as they are closer to the surface. The exact magnitude, epicenter, and depth of the quake might be revised within the next few hours or minutes as seismologists review data and refine their calculations, or as other agencies issue their report.

Based on the preliminary seismic data, the quake did not caused any significant damage, but was probably felt by many people as light vibration in the area of the epicenter.

Shaking was felt in Taunggyi located 88 km from the epicenter, and Pyin Oo Lwin 136 km away.

Seismologists in Northern Thailand said the quake could be felt in Chiang Mai, Chiang Rai and as far as Mae Hong Son. No damage was reported.

In November 2019, a strong earthquake shook a border area between northern Thailand and Laos.

Residents in the northern Thai city of Chiang Mai felt a long period of shaking but saw no major damage. High-rise buildings swayed slowly for at least a half-minute in Bangkok, about 175 miles away from the epicenter, startling residents of the capital.

The U.S. Geological Survey said the 6.1-magnitude quake Thursday morning was about 6 miles below the surface. Moderate quakes of 4.6 and 5.7 magnitude shook the same area overnight.

The quake was centered about 19 miles from Chaloem Phra Kiat, an area about 15 miles from the border with Laos.

In 2014 and earthquake struck Mae Lao, Chiang Rai occurring on May 5. The epicenter was located at a point 9 km south of Mae Lao District, 27 km southwest of Chiang Rai City. One person was killed as a result of the earthquake.