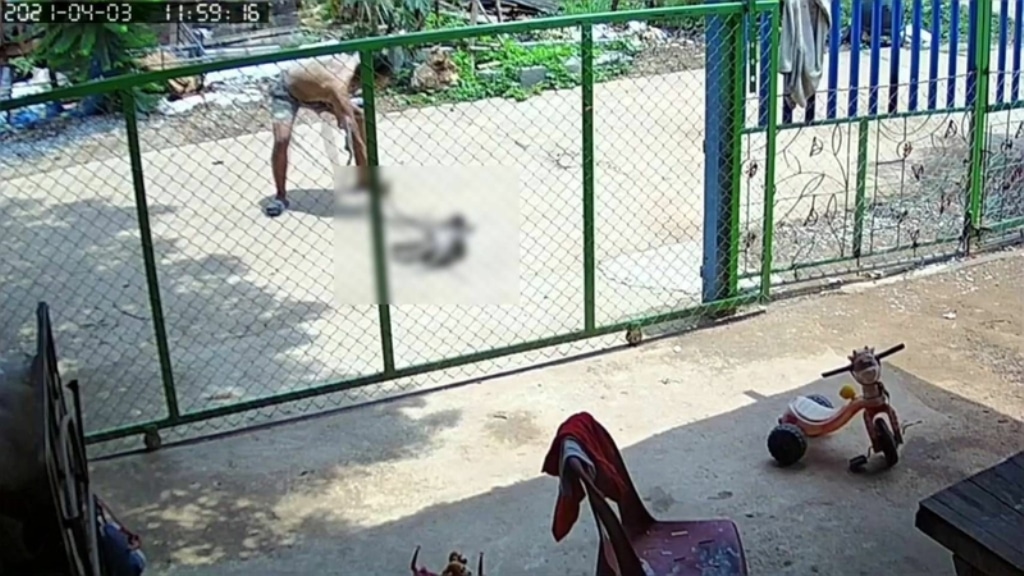 A Thai man has been arrested in northeastern Thailand for the brutal killed a dog because he found the animal “mangy”. The man allegedly attacked the dog with a knife and metal pipe.

On Saturday, Watchdog Thailand posted a video clip on Facebook (Caution Graphic Video) of the man attacking the dog in front of the owners house. The man is seen assaulting the dog several times with a knife and pipe.

Watchdog Thailand said that the gruesome incident took place in northeastern Thailand’s Udon Thani, however it did not specify the date when it had happened.

On the same day, the dog’s owner went to the Police Station to file a complaint against the dog killer. The killer was his 24-year-old nephew Prayat Chantarasena.

Mr Prayat’s mother, 58, came to the police station later and contacted her son on the phone, asking him to surrender himself to police.

After listening to his mother and rode his motorcycle to the station. He was arrested and charged with animal abuse and damaging another person’s assets.

The dog’s owner said that Prayat had said “I really hate you” to the dog when he brutally slayed the dog.

The mans mother said that her son had recently been imprisoned for taking and selling drugs. On the day of the incident, she said she was at a temple.

She revealed the suspect had told her that he wanted to kill the dog as it was mangy. Police said that he would be tested for narcotics consumption.

Under the Animal Welfare Act, owners who fail to provide proper treatment and appropriate living for their pets will face stiff penalties, while those who treat animals poorly; be it neglect or torture, will no longer be able to do so with impunity.