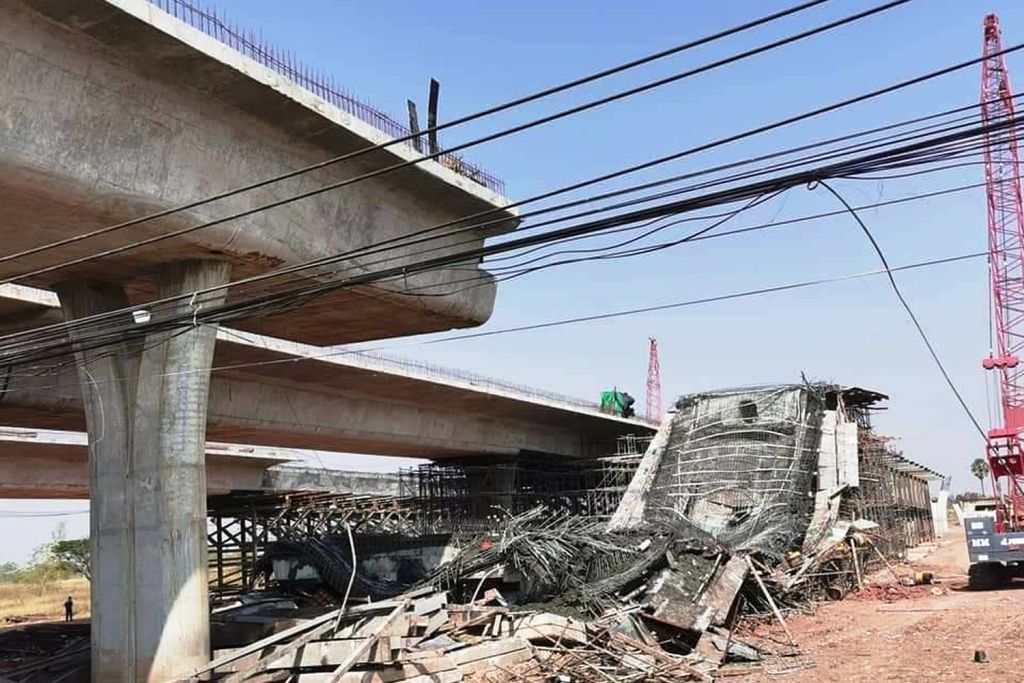 At least 10 construction workers have been hurt after an elevated road section of a road under construction collapsed in northeastern Thailand. The incident took place on Sura Narai Road in tambon Khok Sung in Korat of Nakhon Ratchasima.

Police and rescue workers were alerted at 2.18pm. Upon arrival they found 10 construction workers wounded. Most sustained cuts to the body while some had broken limbs. They were sent to three local hospitals for treatment to their wounds.

An initial investigation found construction workers were on scaffolds to prepare the bed for paving. They were filling concrete into the bed when the scaffolds collapsed.

The 14.5km ring road project, commissioned by the Highways Department, was built to ease traffic in downtown Nakhon Ratchasima.

The entire project, costing 1.4 billion baht, began construction in January 2018. elevated road was scheduled to be completed on Jan 4 this year.

Meanwhile, a 20-kilometre section of the new intercity motorway project linking Ayutthaya’s Bang Pa-in district and Nakhon Ratchasima will be open to motorists Saturday, according to the Highways Departments.

However, the section will only be open to motorists during certain times that have yet to be determined.

Department director-general Sarawut Songsiwilai said construction of the 20km Lam Ta Klong section in Nakhon Ratchasima’s Sikhiu district is 100% complete and will be open for limited use pending a safety inspection.

Mr Sarawut said the section will possibly be open on weekends or long holidays, to alleviate traffic congestion in Lam Ta Klong in Nakhon Ratchasima’s Sikhiu district. He said the limited opening will ensure safety because the entire project is not yet complete.

It runs parallel with Phahon Yothin and Mitraphap highways and ends at the Nakhon Ratchasima bypass in Muang district. The project is divided into 40 separate contracts. Of these, more than 20 have already been completed and the rest is under construction.