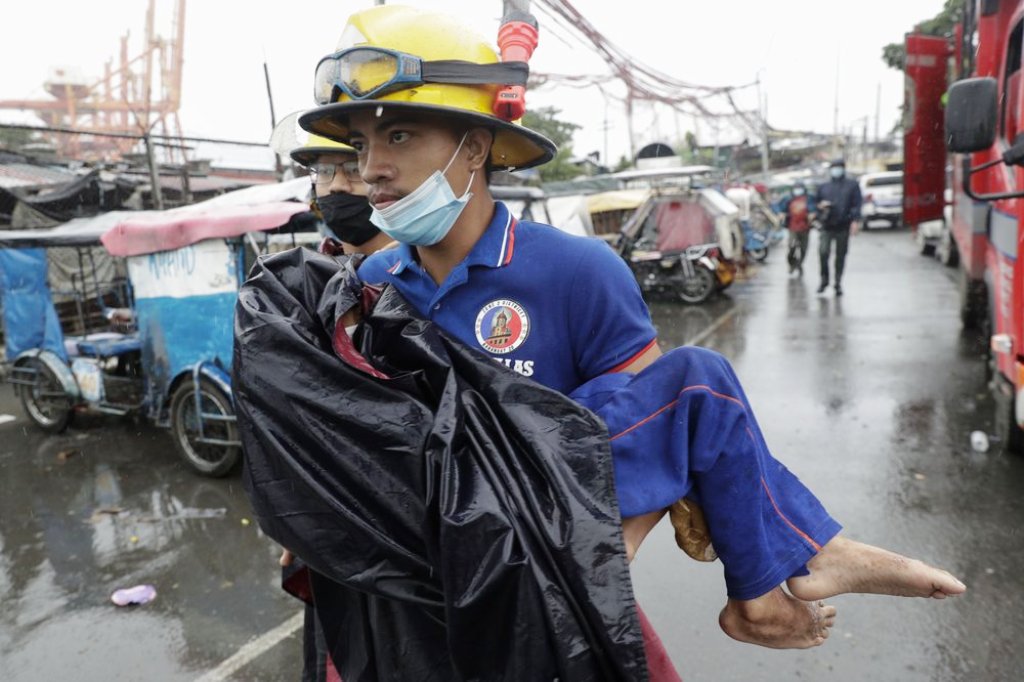 A Super typhoon Goni blew into the eastern Philippines with disastrous force Sunday, killing at least 22 and displacing over 775,513 people.  Typhoon Goni triggering volcanic mudflows that engulfed hundreds of houses before weakening as it blew away from the country, officials said.

Typhoon Goni blasted into the eastern island province of Catanduanes at dawn from the Pacific with sustained winds of 225 kilometers (140 miles) per hour and gusts of 280 kph (174 mph), threatening some provinces still recovering from a deadly typhoon that hit a week ago.

Goni barreled through densely populated regions and threatened to sideswipe Manila. The typhoon shifted southward away from Manila Sunday night and spared the capital.

At least nine people were killed in the hard-hit province of Albay, including a father and son. Villagers fled to safety as the typhoon approached, but the two apparently stayed put in Guinobatan town where about 150 houses were inundated by volcanic mudflows.

“The child was found 15 kilometers (9 miles) away,” Albay Gov. Al Francis Bichara told DZMM radio, adding that the boy was swept away by mudflows and found in the next town.

He did not say whether there were any other residents trapped by the rampaging mudflows in the community and added that downed communications made it hard for people to communicate. The Office of Civil Defense reported that three Guinobatan residents were missing, but it was not immediately clear if they were from the mudflows hit community.

Ricardo Jalad, who heads the government’s disaster-response agency, feared that the typhoon could wreak major damage due to its enormous force. The Philippine weather agency reinforced those concerns, saying that within 12 hours after the typhoon’s landfall, people could face “catastrophic, violent winds and intense to torrential rainfall.”

Residents were warned of possible landslides, massive flooding, storm surges of up to 5 meters (16 feet) and powerful winds that can blow away shanties. But after hitting a mountain range and repeatedly slamming into coastal provinces, the typhoon gradually weakened, although it remained potentially deadly as it blew out into the South China Sea, forecasters said.

One of the most powerful typhoons in the world this year, Goni evoked memories of Typhoon Haiyan, which left more than 7,300 people dead or missing, flattened entire villages, swept ships inland and displaced more than 5 million in the central Philippines in November 2013.

Manila’s main airport was ordered shut down for 24 hours from Sunday to Monday, and airlines canceled dozens of international and domestic flights. Commuter train services were also suspended and a no-sail policy restriction was imposed by the coast guard due to initial fear over the typhoon’s threatening power. The military and national police, along with the coast guard, were put on full alert.

In a Manila gymnasium that was turned into an emergency shelter, COVID-19 outbreaks were an added worry of displaced residents. The Philippines has had more than 383,000 cases of the virus, the second-most in Southeast Asia behind Indonesia.

“We are scared — our fears are doubled,” said Jaqueline Almocera, a 44-year-old street vendor who took cover at the shelter.

The Philippines is lashed by about 20 typhoons and storms each year. It’s also located on the so-called Pacific “Ring of Fire,” where earthquakes and volcanic eruptions are common, making it one of the world’s most disaster-prone countries. – AP