Police opened fire on protesters in Myanmar on Tuesday firing water canons and rubber bullets in a violent day of demonstrations against a military coup. A coup that overthrew Aung San Suu Kyi, one doctor said a woman was unlikely to survive a gunshot wound to the head.

Three other people were being treated for wounds from suspected rubber bullets after police fired guns, mostly into the air, and used water cannon to try to clear protesters in the capital Naypyitaw.

State television reported injuries to police during their attempts to disperse protesters – its first acknowledgement of the demonstrations taking place in the country.

The incidents marked the first bloodshed since the military, led by army chief Senior General Min Aung Hlaing, overthrew Suu Kyi’s newly elected government on Feb. 1 and detained her and other politicians from her National League for Democracy (NLD).

The military alleged that the NLD won by fraud – an accusation dismissed by the election committee and Western governments.

The raid was carried out by about a dozen police personnel, who forced their way into the building in the commercial capital after dark, they said. 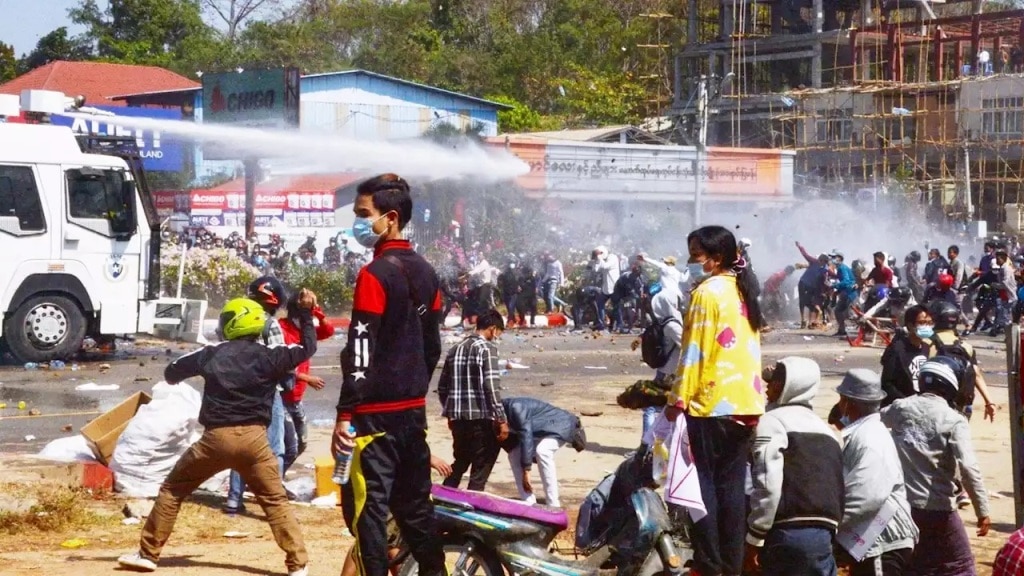 The protests are the largest in Myanmar for more than a decade, reviving memories of almost half a century of direct army rule and spasms of bloody uprisings until the military began a process of withdrawing from civilian politics in 2011.

The United Nations called on Myanmar’s security forces to respect people’s right to protest peacefully. “The use of disproportionate force against demonstrators is unacceptable,” Ola Almgren, the UN representative in Myanmar, said.

The U.S. State Department said it was reviewing assistance to Myanmar to ensure those responsible for the coup face “significant consequences”.

According to reports from Naypyitaw, Mandalay and other cities, numerous demonstrators have been hurt, some of them seriously, by security forces.

A doctor in the Naypyitaw hospital said the shot woman had suffered what was most likely to be a fatal head wound.

“She hasn’t passed away yet, she’s in the emergency unit, but it’s 100% certain the injury is fatal,” said the doctor, who declined to be identified. “According to the X-ray, it’s a live bullet.” Neither police nor the hospital responded to a request for comment.

A man had a chest wound but was not in critical condition. It was not clear if he was hit with a bullet or rubber bullet, the doctor said. State-run MRTV news said a police truck had been destroyed at a demonstration in Mandalay, Myanmar’s second biggest city. It showed footage of the aftermath, including wounded police.

MRTV described the protests as being orchestrated by people who wanted to harm the nation’s stability and had acted aggressively. It made no mention of the coup or other demonstrations across the country.

Earlier, witnesses said police fired into the air in Naypyitaw as a crowd refused to disperse. They then blasted them with water cannon while the protesters responded with stones, a witness said.

Footage posted on social media and verified by Reuters of the woman who was shot showed her with other protesters by what appeared to be a bus-stop shelter some distance from a row of riot police as a water cannon sprayed and several shots could be heard.

The woman, wearing a motorbike helmet, suddenly collapsed. Pictures of her helmet showed what appeared to be a bullet hole. Video from the central town of Bago showed police confronting a crowd and firing water cannon. Police arrested at least 27 demonstrators in Mandalay, domestic media reported.

The situation nationwide was quiet by nightfall. Orders banning gatherings of more than four people and a curfew from 8 p.m. to 4 a.m. have been imposed on Yangon and Mandalay.

Suu Kyi’s party had won a 2015 election but Myanmar’s transition to democracy was brought to a halt by the Feb. 1 coup staged as her government was due to start a second term.

Promises on Monday from Min Aung Hlaing to eventually hold a new election drew scorn. He said the junta would form a “true and disciplined democracy”, different to previous eras of military rule, which brought years of isolation and poverty.

He gave no timeframe but the junta has said a state of emergency would last a year.

A civil disobedience movement affecting hospitals, schools and government offices shows no sign of ending but the crowds in Yangon, Myanmar’s former capital and commercial hub, appeared smaller on Tuesday than the previous day.

“The main thing is we don’t want a coup,” said a 24-year-old woman in Yangon. “If we young people don’t come out who will?”

Activists are also seeking the abolition of a 2008 constitution drawn up under military supervision that gave the generals a veto in parliament and control of several ministries, and for a federal system in ethnically diverse Myanmar.

Suu Kyi won the Nobel Peace Prize in 1991 for campaigning for democracy and spent nearly 15 years under house arrest. The 75-year-old faces charges of illegally importing six walkie-talkies and is being held in detention until Feb. 15. Her lawyer said he has not been allowed to see her.

Suu Kyi remains hugely popular at home despite damage to her international reputation over the plight of theMuslim Rohingya minority.