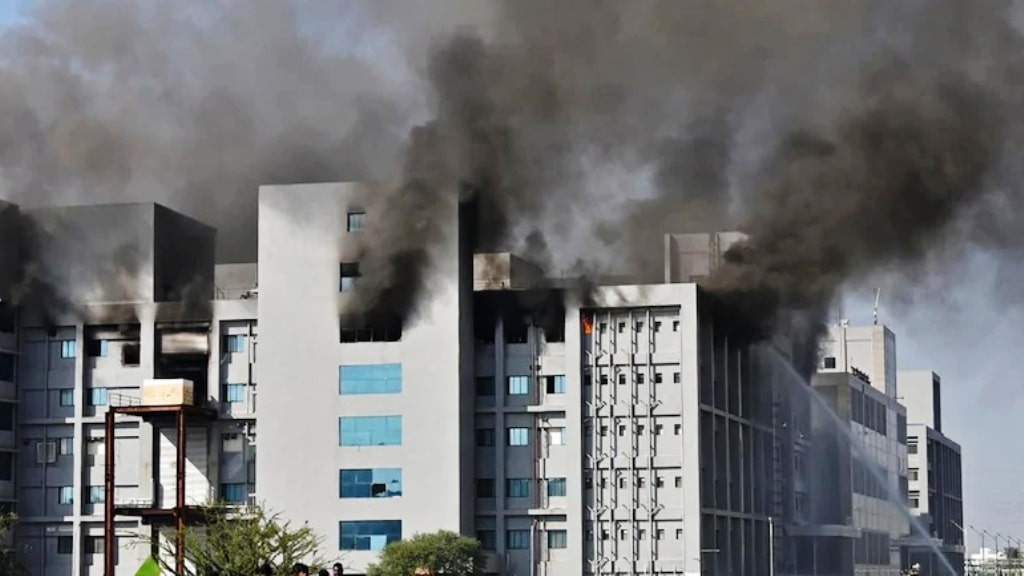 At least people lost their lives when a major fire broke out at the Serum Institute of India (SII), Pune on Thursday afternoon. The fire broke out in a building on the world’s largest vaccine producer’s 100-acre campus in the Manjri area of the city at around 2.45 pm. The exact cause of the fire is yet to be determined.

The Serum Institute of India is manufacturing the Covishield vaccine developed by Oxford University and AstraZeneca.

While the fire sent the alarm bells ringing across the globe, the company has confirmed that it did not affect the production of the Covid-19 vaccine.

It took at least 15 fire tenders almost two hours to douse the fire, which was reported from an under-construction building quite far away from the plant manufacturing Covid-19 vaccine Covishield.

When and where fire broke out

The fire broke out at around 2.45 pm on Thursday on the fourth and fifth floors of an under-construction building in the Serum Institute’s campus in the Manjri area.

The under-construction building is located near the Terminal 1 gate and is quite far away from the Covid-19 manufacturing facility.

It took around 15 fire tenders almost two hours to douse the fire. a few hours later a second fire was reported in the same building. The fire tenders were present at the spot and quickly doused the blaze.

When the fire broke there were over a dozen people trapped inside the building, while nine people were rescued safely, five suffered fatal injuries.

Five people who lost their lives in the blaze have been identified as Rama Shankar Harijan and Bipin Saroj residents of UP, Sushil Kumar Pandey from Bihar; and Mahendra Ingle and Pratik Pashte from Pune. All were contractual labourers and were engaged in electrical works.

Chief Fire Officer Prashant Ranpise said that the fire also gutted furniture, wiring and cabins. No major machinery or instruments were stored on the floors where the fire broke out, he said.

The Serum Insitute announced an ex-gratia amount of Rs 25 lakh to the next of kin of those who died in the fire.

In a statement, Cyrus S Poonawalla, Chairman & Managing Director, Serum Institute of India offered condolences to the families of those killed in the fire. “In this regard, we will be offering a compensation of INR 25 lakhs to each of the families, in addition to the mandated amount as per the norms. We would like to extend our gratitude to everyone for their concerns and prayers in these distressing times,” he said.

The Serum Insitute has assured that the manufacturing of the Covid-19 vaccine Covishield was not affected by the incident.

“I would like to reassure all governments & the public that there would be no loss of #COVISHIELD production due to multiple production buildings that I had kept in reserve to deal with such contingencies at @SerumInstIndia,” SII CEO Adar Poonawalla said in a tweet.

President Ram Nath Kovind and Prime Minister Narendra Modi expressed deep sorrow over the death of five workers in the fire at the Serum Institute.