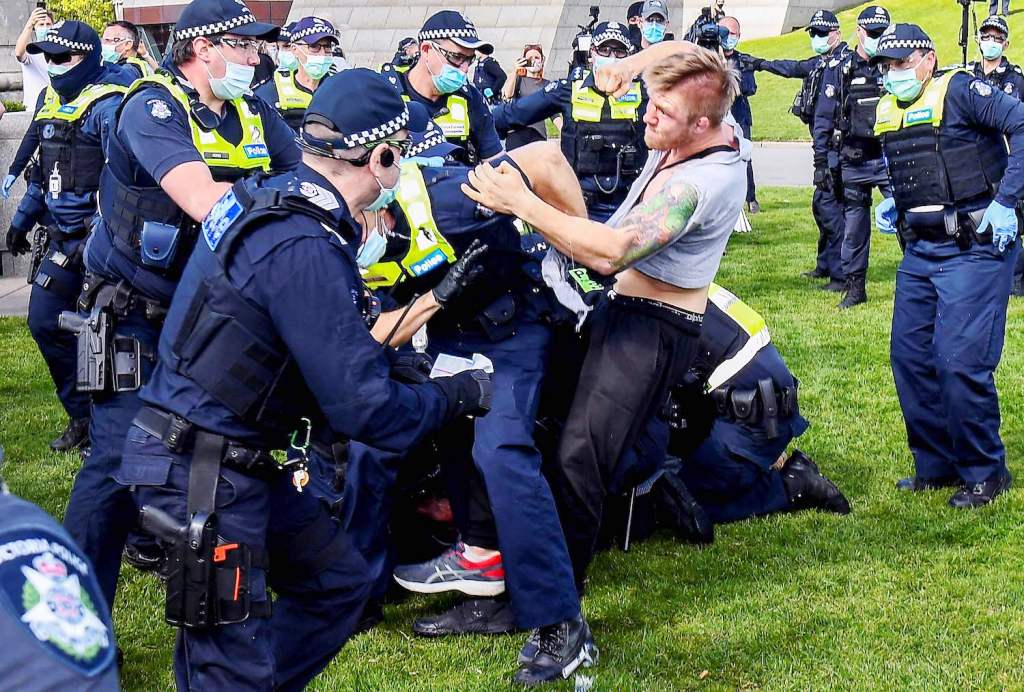 Police across Australia have arrested protesters as hundreds of people joined demonstrations against covid-19 restrictions. Earlier on Saturday it was unclear how many people would be attending Melbourne‘s protests. Some anti-covid-19 lockdown groups also shifted to online events ahead of the State Government’s roadmap announcement on Sunday.

Around 300 protesters later walked from the shrine to Albert Park Lake, where police made more arrests as they attempted to contain the crowd.

Governments handling of Covid-19 in Australia

In a statement, Victoria Police said officers arrested 17 people. Including one person who was arrested for assaulting a police officer. Police issued more than 160 infringement notices for breaches of the Chief Health Officer’s stay-at-home directions.

Several participants told ABC News they were protesting the government’s response to Covid-19. It has killed more than 865,000 people around the world, labelling it overblown or an outright “scam”.

“We are in a city where the cure from Daniel Andrews is actually worse than what’s happening,” protester Fiona Kat said. Many of the protesters were not wearing masks. Some chanted “freedom”, while others shouted insults at the media.

Despite Victoria’s second wave, Australia has dealt relatively well with the virus allowing the rest of the country to roll back restrictions. The country has recorded over 26,200 cases and 748 deaths in a population of 25 million.

Before the protest, Victoria state premier Daniel Andrews told people to stay home and warned that the gathering could jeopardize a path out of lockdown. Victoria authorities will outline on Sunday.

“It is not safe, it is not smart, it is not lawful,” he told media. “In fact, it is absolutely selfish.”