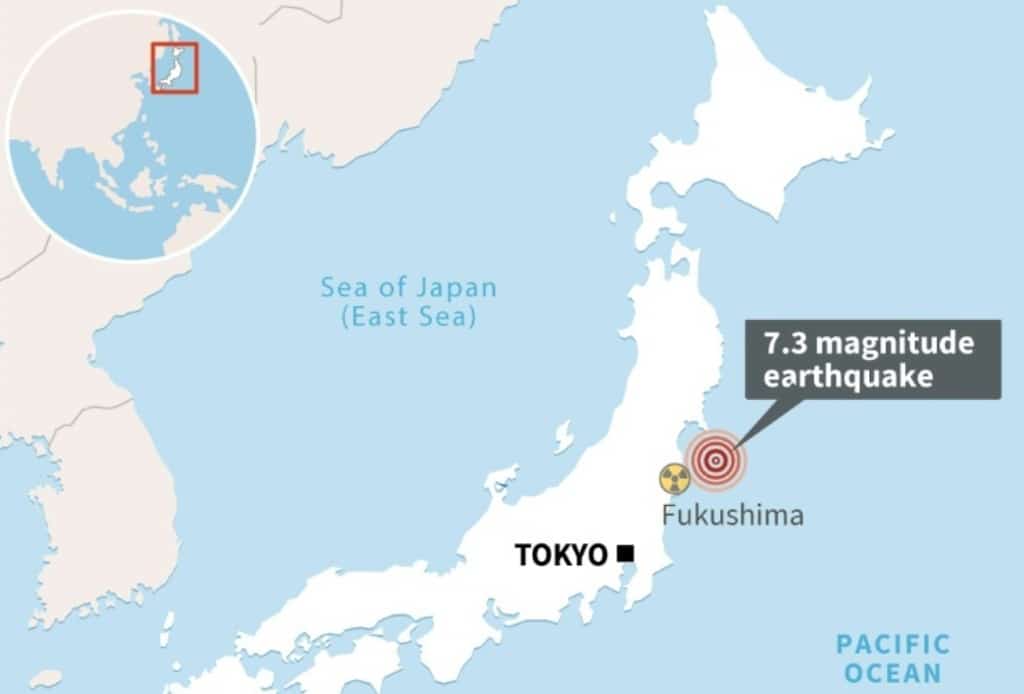 An earthquake with a preliminary magnitude of 7.3 rocked northeastern Japan late Saturday, but there was no tsunami threat and no abnormalities were detected at nuclear plants in the region.

The powerful earthquake occurred at 11.08pm local time, with the epicenter about 60 kilometres below the surface off the coast of Fukushima Prefecture, according to the Japan Meteorological Agency. The temblor was also felt in Tokyo.

It registered upper 6 on Japan’s seismic intensity scale of 7 in the prefecture, one of the areas devastated by a massive quake and ensuing tsunami nearly 10 years ago. The agency said the quake is the strongest to happen off the country’s northeastern coast since April 7, 2011, and believed to be an aftershock of the massive one that occurred on March 11 of that year.

Following the latest quake, the Japanese government set up a task force and Prime Minister Yoshihide Suga headed into his office around 11:28 p.m. Suga told reporters in the early hours of Sunday no major casualties have been reported, adding that Cabinet members will hold a meeting at 9 a.m. to be briefed on the newest information.

Following the latest quake, the Japanese government set up a task force and Prime Minister Yoshihide Suga headed into his office around 11:28 p.m. Suga told reporters in the early hours of Sunday no major casualties have been reported, adding that Cabinet members will hold a meeting at 9 a.m. to be briefed on the newest information.

Top government spokesman Katsunobu Kato warned that quakes of upper 6 on the seismic intensity scale could happen over the next seven days or so. Suga instructed officials to quickly survey the damage from the quake, conduct rescue efforts where necessary, and to relay information to the public in a timely manner.

Horizontal shaking lasted for a few minutes inside a traditional Japanese inn in Minamisoma, Fukushima Prefecture, with plates for food scattered in its dining room. “The initial jolt felt more powerful than the one I experienced in the Great East Japan Earthquake (in 2011),” said 68-year-old Tomoko Kobayashi, who works at the inn. “I wondered if it would end.”

Many residents fled to higher ground for safety in Ishinomaki, Miyagi Prefecture, fearing that a tsunami may come.

“Even if people say we don’t need to worry about a tsunami, I won’t buy it,” said a 50-year-old male worker. “I learned from my bitter experience 10 years ago and that’s why I evacuated.”

No irregularities have been found at the Fukushima Daiichi and Daini nuclear power plants, according to Tokyo Electric Power.

The situation is the same at Japan Atomic Power Co.’s inactive Tokai No. 2 nuclear power plant in the village of Tokai in Ibaraki Prefecture and Tohoku Electric Power’s Onagawa nuclear plant in Miyagi Prefecture, according to their operators.

Some expressways in the northeastern region were partially closed and shinkansen bullet train services were canceled.

A resident of Shiogama in Miyagi Prefecture, 76-year-old Mariko Yoshida, said the quake hit just after she went to bed. “I’m scared of aftershocks,” she said, adding, “I live by myself and what am I supposed to do?”

Kato told a press conference that at one point some 950,000 homes were without electricity, as some thermal power plants went offline.